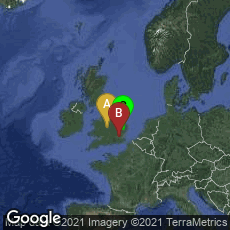 Diversifying his business interests, between 1740 and 1742 Cave established the first water powered spinning mill in the world. To do so he obtained a license from inventor Lewis Paul of Birmingham for four or five of Paul's patented water-powered spinning machines, each with 50 spindles. Cave first had his machines set up in a warehouse in London. In 1742 Cave acquired Marvel's Mill on the River Nene at Northampton, and had the mill rebuilt to hold his spinning machines. In contrast to his immense success as a publisher, Cave's venture into the textile industry was not a success.

Paul's roller spinners were the precursor of Richard Arkwright's water frame. In December 2018 a letter from Cave to Lewis Paul concerning problems Cave experienced in obtaining machinery from Paul came into my collection. In it Cave complains of delays in the development of the mill and the new equipment. The letter reads as follows:

I expected to have seen you in town, or country, or to have heard from you, in answer to Lord Suffolk as to ye quantity of Building, &c but am disappointed in every way, as are several people cardmakers & mechanics, whom I promised should see you in town, as Mr.Warren gave grounds to expect & so stopt my journey. And I know not what to say those people, or what to think my self. Mr Warren tells me the work is going fowards, but I should be glad to be assured from yourself, if I have wanted such a favour, that you will make me my number without delay. There are some here who have known you before me, that you will not be in haste to give my Bargain, and more to that purpose, I only mention it to put you on with Business in hand to purpose & that you prove all these surmises to have no foundation with regard to me whatever Authority they may have from any former conduct.