The Wapping tunnel connecting the Liverpool and Manchester Railway with the Wapping dock in Liverpool, as it was in the 1830s. 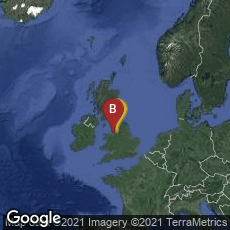 Excavation of the Olive Mount cutting on the Liverpool and Manchester Railway. The cutting was 20 ft (609.6 cm) wide and 70 ft (21.3 m) deep. Construction required the removal of 480,000 cubic yards of sandstone. This was used to build the Roby embankment and the Sankey Viaduct.

In 1831 architect and lithographer Thomas Talbot Bury published a spectacular folio volume of 7 hand-colored aquatint plates through R. Ackermann in London depicting very dramatically operation of the first steam-powered railroad to carry passengers as well as freight. This work was entitled Coloured Views on the Liverpool and Manchester Railway, with Plates of the Coaches, Machines, &c. from Drawings Made on the Spot, by Mr. T. T. Bury. With Descriptive Particulars, Serving as a Guide to Travellers on the Railway. As Gordon Ray wrote in The Illustrator and the Book in England, "This classic record of the beginnings of the railway age was also one of the last significant books illustrated with aquatints. Lithography was already sweeping the field for pictorial records of this kind”. Today this book is primarily remembered for its dramatic plates. However, I also find the brief introductory text extremely informative regarding the symbiotic relationship between transportation and manufacturing that motivated the construction of the railroad, which originated as an improved way to transport cotton from Liverpool, the port of entry for imports of cotton from America, with the inland power-loom establishments in Manchester. Bury's statistics also document the extraordinary growth of the British textile industry resulting from the introduction of power-looms in textile manufacturing, supported by the new railway, and the resulting increase in cotton imports from America, which benefitted cotton-growers in the American south.

Bury wrote on p. 1 of the text supplied with the second part:

"The bulk of this immense traffic has been carried on by means of two canals, the Mersey and Irwell, and the Duke of Bridgewater's canal. This mode of conveyanace was liable to great uncertainty, as well from drought in summer and frost in winter, as, from the canal's termination at Runcorn, on the Mersey, twenty miles above Liverpool, the passage to and from which sometimes was so retarded by contrary winds and tempestuous weather, that goods have been known to make the transit from New York to Liverpool in less time than from the latter town to Manchester. These inconveniences were so severely felt, that when, in 1824, the expediencey of a rail-road between the two towns was suggested, the project was warmly supported by the principal merchants of both. A company was formed for carrying the plan into effect...."

In 1976 Hugh Broadbent of Oldham England published an excellent full-size color facsimile of Bury's book with an historical introduction to the railway by George Ottley, a bibliographical note by J. M. Lloyd and Notes on the Plates.