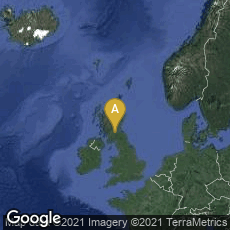 In 1828 Scottish inventor James Beaumont Neilson received British patent No. 5701 for the "Improved Application of Air to Produce Heat in Fires, Forges,and Furances where Bellows or other Blowing Apparatus are Required."

"While trying to solve a problem with a blast furnace at Wilsontown Ironworks, Neilson realized that the fuel efficiency of the furnace could be increased by blowing it with hot air, rather than cold air, by passing it through a red-hot vessel. Experiments were continued at Clyde Iron Works, leading to his forming a partnership with Charles Macintosh and others to exploit it. Patents were obtained for the system in 1828. Experimentation showed that a temperature of 600° Fahrenheit reduced consumption to a third of that with cold blast, and enabled raw coal to be used instead of coke, with a further cost saving. It also enabled the exploitation of black band ironstone, the use of which had previously proved unprofitable"(Wikipedia article on James BEaumont Neilson, accessed 01-2019).