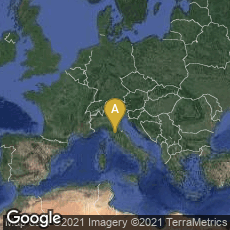 Maximus Planudes' Anthologia Graeca Planudea was first published in print by Lorenzo di Alopa, in Florence on August 11, 1494. This was the first of three editions printed by di Alopa in capital letters only, using a striking upper case typeface in two fonts, designed by the editor of the volume, Janus Lascaris to imitate epigraphic letter-forms. As Lascaris explains in his dedicatory letter, by using capital letters only he hoped to avoid the complications of reproducing Greek script. Lascaris’ type contained only capital letters, with breathings and accents cast and set separately and attached to the letters of the smaller font by means of solder or wax, so that its body matched perfectly that of the larger font. Though visually arresting, such a typeface proved insufficiently compact for the printing of scholia. The earliest copies of the edition contain, as the final quire, Lascaris' verse epilogue and dedication to Piero de' Medici, then leader of Florence. This dedication was suppressed in the second issue later in 1494, presumably after Piero's proscription and flight from Florence, along with the rest of the Medici family. (ISTC No. ia00765000).

Lascaris's edition was the version by which the work was known in Western Europe until the Palatine Anthology was published in print by French classical scholar Richard François Philippe Brunck in his Anthologia Graeca or Analecta veterum Poetarum Graecorum 3 vols., (1772–1776).