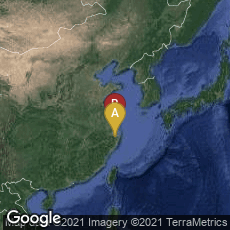 About 1859 Irish American Presbyterian missionary printer William Dill Gamble, head of the American Presbyterian Mission Press at Ningbo and Shanghai, developed typographical inventions to improve Chinese movable type printing. He invented cutting characters on boxwood, and making plates from these characters by electrotype. He then made matrices by the hundreds, instead of singly, as was formerly done. Characters produced by the new process, known as "Gamble's Characters," were clearer and also retained more of the original calligraphic effect. The electrotype process made it possible to reduce size of the typeface, without loss of clarity. Smaller type made it possible to print the whole Chinese translation of the Bible in one volume.

"With certain modifications Gamble's electrotype process for Chinese matrices (diandu Zhongwen Zimo...) remained in use until the advent of computer generated fonts in the 1970s. Thanks to Gamble's invention the APMP was able to supply complete Chinese fonts to printers in other parts of China (including to the leading Shanghai newspaper Shenbao) and, indeed, all over the world. Gamble also conducted the first systematic frequency counts of Chinese characters and ascertained that only 5,150 different characters were needed for most purposes. Using this finding he was able to design a type-case for compositors with the characters arranged in sets according to their frequency and Kangzi classifier. This enabled composition to be done much more quickly than previously. APMP's division of the fonts into seven type sizes is still in use today as well as in Japan (to which Gamble introduced the new techniques during a brief stopover on his return to America in 1869" (E. P. Wilkinson, Chinese History: A Manual [2000] 452).