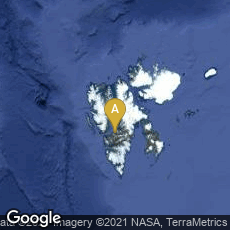 Image Source: arcticworldarchive.org
In 2017 Piql AS opened the Arctic World Achive about 300 meters below the permafrost inside a decommissioned coal mine outside Longyearbyen on the island of Svalbard, Norway. When I wrote this entry in November 2020 Piql claimed that it would be able to preserve digital information for 500 or 1000 years inside the Arctic World Archive vault.


Because of the island's Arctic climate and resulting permafrost, even if the power to the facility failed, the temperature inside the vault was expected toremain below freezing point. The proprietors of the project believed that this temperature would be cold enough to preserve the vault's contents for decades or more. It was also believed that the vault 250 metres (820 ft) below the permafrost was situated deeply enough to avoid damage even from nuclear and Electromagnetic Pulse weapons.

"The data storage concept of the Arctic World Archive is to store offline on digital film that has a reported lifetime of at least 500 years.[1][4] It is stored on film reels made using a refined version of ordinary darkroom photography technology. The film is made of polyester coated in silver halide crystals[7] and powder-coated with iron oxide. Supposedly the PiqL film has a life span of at least 500 years and possibly up to 2000 if stored in optimum conditions.[6]
"The level of security of the data represents the "cold layer" of archiving. The "hot" (accessible online repositories) and "warm" (e.g. Internet Archive) layers both have the weakness of being founded upon electronics - both would be wiped out in a repeat of the 19th-century a powerful geomagnetic storm known as the "Carrington Event". It is an incomplete but more secure snapshot of data, with archiving intended at five-year intervals.[7]
"Realising that people in the very far future may not understand what they see in the vault, a kind of "Rosetta Stone" has been devised to help decode the data, in the form of a guide to interpreting the archive. The guides are all readable by eye, after magnification, and written in English, Arabic, Spanish, Chinese, and Hindi "(Wikipedia article on Arctic World Archive, accessed 11-2020).