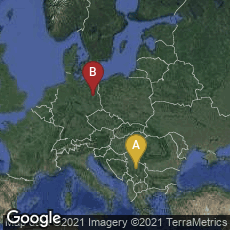 Jeremy Norman Collection of Images -&nbspCreative Commons
In 1930 Serbian mathematician, astronomer, climatologist, and geophysicist Milutin Milanković (Milankovitch) published from Berlin Mathematisch Klimalehre und astronomische Theorie der Klimaschwankungen, in Handbuch der Klimatologie, edited by W. Köppen and R. Geiger, Band I, Teil A.This 176 page treatise was Milanković's first exposition of what became known as Milanković cycles—cyclical changes in a planet’s climate caused by the variations in its orbit, which affect the amount of solar radiation (insolation) the planet receives. Milankovitch theorized that variations in eccentricity, axial tilt, and precession of the Earth’s orbit determined climatic patterns on Earth through orbital forcing, leading to periodic Ice Ages. On Earth these variations have played a decisive role in initiating the growth of glaciers, leading to at least five major periods of significantly colder temperatures.

Eleven years later, in 1941Milancović published the definitive exposition of his theories, expanded to 633 pages, and entitled Kanon der Erdbestrahlung und seine Anwendung auf das Eiszeitenproblem. Milancović spent two years arranging and writing the Kanon der Erdbestrahlung, which contained the results of his nearly four decades of mathematical climate research. He submitted the manuscript to the printer on 2 April 1941, four days before the Germans began the bombing of Belgrade. During the German attack the firm printing the Kanon was destroyed; however, nearly all the printed sheets for the work remained undamaged in the printer’s warehouse. On 15 May, during the German occupation of Serbia, two German officers who had studied geology visited Milancović’s home to bring him greetings from Wolfgang Sörgel, professor of geology and paleontology at Freiburg. Milanković gave the officers what was then the only complete printed copy of the Kanon to send to Sörgel, to make sure that his work would be preserved. The Kanon ended up being published the same year by the Royal Serbian Academy, which issued it as Vol. 133 of its “Éditions spéciales.”