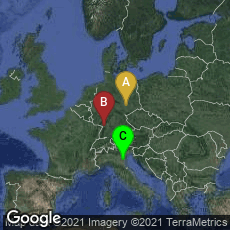 In 1887 Heinrich Hertz, professor physics at the University of Karlsruhe, proved the existence of electromagnetic waves, the theoretical basis for wireless communication. The implications of Hertz's discovery was not immediately appreciated until 1892 when Hertz
published his collected papers on electromagnetic waves, Untersuchungen ueber die Ausbreitung der elektrischen Kraft, in Leipzig at the press of Johann Ambrosius Barth. For the edition Hertz added a 31-page introduction. Hertz's book was translated into English, with a preface by William Thomson, Lord Kelvin, as Electric Waves: Being Researches on the Propagation of Electric Action with Fine Velocity Through Space, and published by Macmillan in London in 1893.

The death of Hertz in 1894 evoked reviews of his discoveries which interested Italian inventor Guglielmo Marconi.

"He was permitted to briefly study the subject under Augusto Righi, a University of Bologna physicist and neighbour of Marconi who had done research on Hertz's work. Righi had a subscription to The Electrician where Oliver Lodge published detailed accounts of the apparatus used in his (Lodge's) public demonstrations of wireless telegraphy in 1894.

"Marconi began to conduct experiments, building much of his own equipment in the attic of his home at the Villa Griffone in Pontecchio, Italy, with the help of his butler Mignani. His goal was to use radio waves to create a practical system of "wireless telegraphy"—i.e. the transmission of telegraph messages without connecting wires as used by the electric telegraph. This was not a new idea—numerous investigators had been exploring wireless telegraph technologies for over 50 years, but none had proven commercially successful. Marconi did not discover any new and revolutionary principle in his wireless-telegraph system, but rather he assembled and improved a number of components, unified and adapted them to his system" (Wikipedia article on Guglielmo Marconi, accessed 02-08-2012).