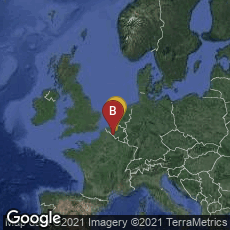 The Répertoire Bibliographique Universel, an Analog Search Engine to Organize All the World's Knowledge

Staff at the International Institute of Bibliography writing and classifying records for the Répertoire Bibliographique Universel, c. 1900.

In 1895 Belgian author, entrepreneur, visionary, lawyer and peace activist Paul Otlet and Belgian professor of international law and legislator Henri La Fontaine founded the Institut International de Bibliographie in Brussels. In this organization they began the creation of a system of 3 x 5 index cards cataloguing facts that became known as the "Répertoire Bibliographique Universel" (RBU). By the end of 1895 it had grown to 400,000 entries. Eventually it reached 16 or 18 million cards.  The goal was to organize all the knowledge of the world.

To organize the cards Otlet and La Fontaine developed the Universal Decimal Classification based on the Dewey Decimal Classification, but using auxiliary signs to indicate various special aspects of a subject and relationships between subjects. "It thus contains a significant faceted or analytico-synthetic element, and is used especially in specialist libraries. UDC has been modified and extended through the years to cope with the increasing output in all disciplines of human knowledge, and is still under continuous review to take account of new developments" (Wikipedia article on Universal Decimal Classification, accessed 03-13-2012).

"In 1896, Otlet set up a fee-based service to answer questions by mail, by sending the requesters copies of the relevant index cards for each query; scholar Alex Wright has referred to the service as an 'analog search engine'. By 1912, this service responded to over 1,500 queries a year. Users of this service were even warned if their query was likely to produce more than 50 results per search.

"Otlet envisioned a copy of the RBU in each major city around the world, with Brussels holding the master copy. At various times between 1900 and 1914, attempts were made to send full copies of the RBU to cities such as Paris, Washington, D.C. and Rio de Janeiro; however, difficulties in copying and transportation meant that no city received more than a few hundred thousand cards" (Wikipedia article on Paul Otlet, accessed 03-02-2009).

Following World War I, in 1920 the organization, then called the Mundaneum, opened in the left wing of the palace of the Cinquantenaire de Bruxelles called the Palais Mondial-Mundaneum.

In 1931 the Institut International de Bibliographie was renamed the Institut International de Documentation, IID.  World War II and the deaths of La Fontaine in 1943 and Otlet in 1944 slowed the project. Although many of the cards were stored, some of them in the Brussels subway, volunteers kept the dream alive. In 1998, Belgium’s French community government revived the Mundaneum’s memory, bringing most of the archives to a beautiful Art Deco building in the city of Mons.