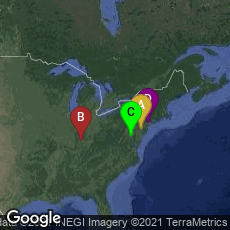 Key Events in the Development of the UNIVAC, the First Electronic Computer Widely Sold in the United States Univac I at Census Bureau with two operators ca. 1960. If this date is accurate it is notable that the system had not been replaced by that date.

On April 24, 1947 the Electronic Control Company (Pres Eckert and John Mauchly) in Philadelphia developed the tentative instruction code C-1 for what they called  “a Statistical EDVAC.” This was the earliest document on the programming of an electronic digital computer intended for commercial use. On May 24, 1947 they renamed the planned “Statistical EDVAC” the UNIVAC. About November 1947 Electronic Control Company  issued the first brochure advertising the UNIVAC —the first sales brochure ever issued for an electronic digital computer. A special characteristic of the brochure was that it did not show the product, since at this time the product was not yet fully conceptualized either in design or external appearance.

On October 31, 1947 Eckert and Mauchly applied for a U.S. patent on the mercury acoustic delay-line electronic memory system. This was the "first device to gain widespread acceptance as a reliable computer memory system." (Hook & Norman, Origins of Cyberspace [2002]1191).  The patent 2,629,827 was granted in 1953.

In 1948 a contract was drawn up between the renamed company, Eckert-Mauchly Computer Corporation, and the United States Census Bureau for the production of the UNIVAC.

As the first UNIVAC was being developed, in 1949 Betty Holbertson  developed the UNIVAC Instructions Code C-10. C-10 was the first software to allow a computer to be operated by keyboarded commands rather than dials and switches. It was also the first mnemonic code. Also in 1949, Grace Hopper left the Harvard Computation Laboratory to join Eckert-Mauchly Computer Corporation as a senior mathematician/programmer. In June 1949 John Mauchly conceived the Short Code—the first high-level programming language for an electronic computer—to be used with the BINAC. It was also the first interpreted language and the first assembly language. The Short Code first ran on UNIVAC I, serial 1, in 1950. [In 2005 no copies of the Short Code existed with dates earlier than 1952.]

UNIVAC I, serial 1, was signed over to the United States Census Bureau on March 31, 1951. The official dedication of the machine at the government offices occurred on June 14, 1951. Excluding the unique BINAC, the UNIVAC I was the first electronic computer to be commercially manufactured in the United States. Its development preceded the British Ferranti Mark 1; however, the British machine was actually delivered to its first customer one month earlier than the UNIVAC I.

Though the United States Census Bureau owned UNIVAC I, serial 1, the Eckert-Mauchly division of Remington Rand retained it in Philadelphia for sales demonstration purposes, and did not actually install it at government offices until twenty-one months later.

In 1951 magnetic tape was used to record computer data on the  UNIVAC I with its UNISERVO tape drive. The UNISERVO was the first the tape drive for a commercially sold computer.

It's "recording medium was a thin metal strip of ½″ wide(12.7 mm) nickel-plated phosphor bronze. Recording density was 128 characters per inch (198 micrometre/character) on eight tracks at a linear speed of 100 in/s (2.54 m/s), yielding a data rate of 12,800 characters per second. Of the eight tracks, six were data, one was a parity track, and one was a clock, or timing track. Making allowance for the empty space between tape blocks, the actual transfer rate was around 7,200 characters per second. A small reel of mylar tape provided separation from the metal tape and the read/write head" (Wikipedia article on Univac I, accessed 04-26-2009).

In 1952 Grace Hopper wrote the first compiler (A-0) for UNIVAC, and on October 24, 1952 the UNIVAC Short Code II was developed. This was the earliest extant version of a high-level programming language actually intended to be used on an electronic digital computer.

On November 4, 1952 UNIVAC I, serial 5, used by the CBS television network in New York City, successfully predicted the election of Dwight D. Eisenhower as president of the United States. This was the first time that millions of people (including me, then aged 7) saw and heard about an electronic computer. The computer, far too large and delicate to be moved, was actually in Eckert-Mauchly's corporate office in Philadelphia. What was televised by Walter Cronkite from CBS studios in New York was a dummy terminal connected by teletype to the machine in Philadelphia.

♦ In 2010 journalist Ira Chinoy completed a dissertation on journalists' early encounters with computers as tools for news reporting, focusing on election-night forecasting in 1952. The dissertation, which also explored methods journalists used to cover elections in the age of print, was entitled Battle of the Brains: Election-Night Forecasting at the Dawn of the Computer Age.

In 1954 UNIVAC I, serial 8, was installed at General Electric Appliance Park, Louisville, Kentucky. Serial 8 was the first stored-program electronic computer sold to a nongovernmental customer in the United States. It ran the "first successful industrial payroll application."

This humorous promotional film for the Remington Rand UNIVAC computer features J. Presper Eckert and John Mauchly in leading roles. Produced in 1960, the film outlines the earlier history of computing leading to the development and application of the UNIVAC.

Innovative Aspects of the BINAC, the First Electronic Computer Ever Sold
CSIRAC, the First Stored-Program Computer in Australia, is Operational
The First Ferranti Mark I is Delivered
Eckert & Mauchly Issue the First Engineering Report on the EDVAC
Key Software Developments in the Production of UNIVAC 1