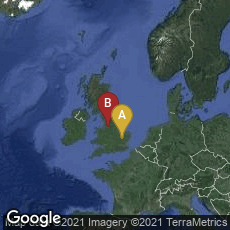 Computer graphic of the 3D structure of Myoglobin

At the second English computer conference held in Manchester from July 9-12, 1951 computer scientist John Makepiece Bennett and biochemist and crystallographer John Kendrew described their use of the Cambridge EDSAC for the computation of Fourier syntheses in the calculation of structure factors of the protein molecule myoglobin. This was the first application of an electronic computer to computational biology or structural biology. The first published account of this research appeared in the very scarce Manchester University Computer Conference Proceedings (1951).

Kendrew and Bennett formally published an extended version of their paper as "The Computation of Fourier Syntheses with a Digital Electric Calculating Machine," Acta Crystallographica 5 (1952) 109-116.

In 1962 Kendrew received the Nobel Prize in chemistry for his discovery of the 3-dimensional molecular structure of myoglobin, the first protein molecule to be "solved."