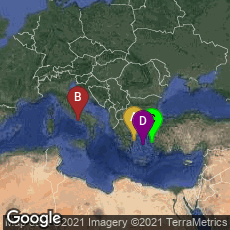 As with all figures of ancient Greece who did not appear on coins, we no reliable idea what the tyrant Peisistratos actually looked like. Traditionally he is associated with the standardization of the Homeric texts. This imaginative portrait by Jean Auguste Dominique Ingres done between 1824 and 1834 is at least by an artist of renown.

Many scholars believe that the Iliad is the oldest extant work of literature in the ancient Greek language, making it one of the first works of ancient Greek literature. It is believed that the Odyssey, sequel to the Iliad, was composed after the Iliad. Both epic poems, products of the oral tradition, may have undergone a process of standardization and refinement out of older material around 750 BCE. The standardization of the Homeric texts may have been caused by the Athenian tyrant Peisistratos (d. 527/8 BCE) who reformed the recitation of Homeric poetry at the Panathenaic festival, which he initiated. This reform may have involved the production of a canonical written text. A tradition concerning the role of Peisistratos in the standardization of Homer was current in the ancient world; however, T. W. Allen, in his classic work, Homer: The Origins and Transmission (1924) refuted this theory in his chapter "Pisistratus and Homer."

When the Homeric poems would have taken on a fixed written form is debatable. According to the traditional 'transcription hypothesis', a non-literate 'Homer' dictated his poem to a literate scribe in the 6th century or earlier. However, in view of the way that texts were written on papyrus before the Hellenistic period, a canonical text would probably have been impossible at this time. Reynolds & Wilson wrote:

"Finally it should be emphasized that the text as arranged on the papyrus was much harder for the reader to interpret than in any modern book. Punctuation was usually rudimentary at best. Texts were written without word-division, and it was not until the middle ages that a real effort was made to alter this convention in Greek or Latin texts (in a few Latin texts of the classical period a point is placed after each word). The system of accentuation, which might have compensated for this difficulty in Greek, was not invented until the Hellenistic period, and for a long time after its invention it was not universally used; here again it is not until the early middle ages that the writing of accents becomes normal practice. In dramatic texts throughout antiquity changes of speaker were not indicated with the precision now thought necessary; it was enough to write a horizontal stroke at the beginning of a line, or two points one above the other, like the modern English colon, for changes elsewhere; the names of the characters were frequently omitted. . . . Another and perhaps even stranger feature of books in the pre-Hellenistic period is that lyric verse was written as if it were prose; the fourth-century papyrus of Timotheus (P. Berol. 9875) is an instance, and even without this valuable document the fact could have been inferred from the tradition that Aristophanes of Byzantium (c. 257-180 BCE) devised the colometry which makes clear the metrical units of the poetry (Dion. Hal. de comp.verb. 156, 221). It is to be noted that the difficulties facing the reader of an ancient book were equally troublesome to the man who wished to transcribe his own copy. The risk of misinterpretation and consequent corruption of the text in this period is not to be underestimated. It is certain that a high proportion of the most serious corruptions in classical texts go back to this period and were already widely current in the books that eventually entered the library of the Museum of Alexandria" (Reynolds and Wilson, Scribes and Scholars, 3rd ed. [1991] 4-5).

"Though evincing many features characteristic of oral poetry, the Iliad and Odyssey were at some point committed to writing. The Greek script, adapted from a Phoenician syllabary around 800 BCE, made possible the notation of the complex rhythms and vowel clusters that make up hexameter verse. Homer's poems appear to have been recorded shortly after the alphabet's invention: an inscription from Ischia in the Bay of Naples, ca. 740 BCE, appears to refer to a text of the Iliad; likewise, illustrations seemingly inspired by the Polyphemus episode in the Odyssey are found on Samos, Mykonos and in Italy in the first quarter of the seventh century BCE. We have little information about the early condition of the Homeric poems, but Alexandrian editors stabilized the text in the second century BCE, from which all modern texts descend" (Wikipedia article on Homer, accessed 11-27-2008).