Front panel of a PDP-5 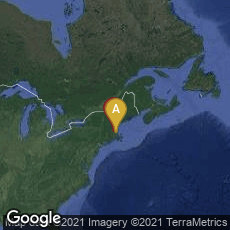 In December 1959, at the Eastern Joint Computer Conference in Boston, Digital Equipment Corporation (DEC) of Maynard, Massachusetts, demonstrated the prototype of its first computer, the PDP-1 (Programmed Data Processor-1), designed by a team headed by Ben Gurley.

"The launch of the PDP-1 (Programmed Data Processor-1) computer in 1959 marked a radical shift in the philosophy of computer design: it was the first commercial computer that focused on interaction with the user rather than the efficient use of computer cycles" (http://www.computerhistory.org/collections/decpdp-1/, accessed 06-25-2009).

Selling for $120,000, the PDP-1 was a commercialization of the TX-O and TX-2 computers designed at MIT’s Lincoln Laboratory. On advice from the venture-capital firm that financed the company, DEC did not call it a “computer,” but instead called the machine a “programmed data processor.” The PDP-1 was credited as being the most important in the creation of hacker culture.

In 1963 DEC introduced the PDP-5, it's first 12-bit computer. The PDP-5 was later called “the world’s first commercially produced minicomputer.” However, the PDP-8 introduced in 1965 was also given this designation.

Two years later, in 1965 DEC introduced the PDP-8, the first “production model minicomputer.” “Small in physical size, selling in minimum configuration for under $20,000.”

In 1970 DEC (Digital Equipment Corporation) of Maynard, Massachusetts, introduced the PDP-11minicomputer, which popularized the notion of a “bus” (i.e.“Unibus”) onto which a variety of additional circuit boards or peripheral products could be placed. DEC sold 20,000 PDP-11s by 1975.