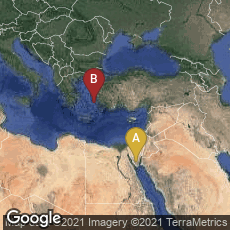 Finding Additional Leaves of the Codex Sinaiticus in a Book Binding During restoration work on May 26, 1975 the monks of St. Catherine's monastery at Mount Sinai discovered a sealed room in the monastery that contained art treasures and 1148 manuscripts, in various languages, of which 305 were complete. Among the the fragments were 12 complete leaves, and some fragments, of the Codex Sinaiticus.

On March 6, 2014 TheIndependent.co.uk reported that Nikolas Sarris, a British-based academic, chanced upon another leaf or a portion of a leaf of the Codex Sinaiticus while inspecting photographs of a series of book bindings that were made by two monks at St. Catherine's monastery during the 18th century.

"Over the centuries, antique parchment was often re-used by St Catherine's monks in book bindings because of its strength and the relative difficulty of finding fresh parchment in such a remote corner of the world.

"A Greek student conservator who is studying for his PhD in Britain, Mr Sarris had been involved in the British Library's project to digitise the Codex and quickly recognised the distinct Greek lettering when he saw it poking through a section of the book binding. Speaking from the Greek island of Patmos yesterday, Mr Sarris said: 'It was a really exciting moment. Although it is not my area of expertise, I had helped with the online project so the Codex had been heavily imprinted in my memory. I began checking the height of the letters and the columns and quickly realised we were looking at an unseen part of the Codex.'

"Mr Sarris later emailed Father Justin, the monastery's librarian, to suggest he take a closer look at the book binding. 'Even if there is a one-in-a-million possibility that it could be a Sinaiticus fragment that has escaped our attention, I thought it would be best to say it rather than dismiss it.'

'Only a quarter of the fragment is visible through the book binding but after closer inspection, Father Justin was able to confirm that a previously unseen section of the Codex had indeed been found. The fragment is believed to be the beginning of Joshua, Chapter 1, Verse 10, in which Joshua admonishes the children of Israel as they enter the promised land.

"Speaking to The Art Newspaper, Father Justin said the monastery would use scanners to look more closely at how much of the fragment existed under the newer book binding. 'Modern technology should allow us to examine the binding in a non-invasive manner,' he said.

"Mr Sarris said his find was particularly significant because there were at least 18 other book bindings in the monastery's library that were compiled by the same two monks that had re-used the Codex. 'We don't know whether we will find more of the Codex in those books but it would definitely be worth looking,' he said."