Note the different manuscript illumination at the end of this book in the Codex Alexandrinus. 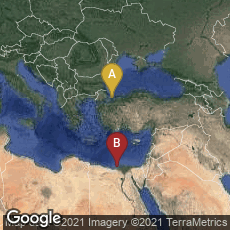 Folio 41v from the Codex Alexandrinus contains the end of the Gospel of Luke with the decorative tailpiece found at the end of each book. These colophons frequently contain images of fruit or vegetation are some of the earliest examples of manuscript illumination to survive.

The Codex Alexandrinus, a fifth century manuscript containing the majority of the Septuagint and the New Testament, is, along with the Codex Sinaiticus, and the Codex Vaticanus, one of the earliest and most complete manuscripts of the Bible. It derives its name from Alexandria, Egypt where it resided for a number of years. The manuscript, preserved in the British Library, contains the Gospels in Byzantine text-type and the rest of the New Testament in Alexandrian text-type.  The beginning lines of each book are written in red ink and sections within the book are marked by a larger letter set into the margin. The text is written continuously in a large square uncial hand in two columns. Titles of each of the books of the Bible are marked by a stylized decorative colophon (a distinctive ornamental tailpiece) throughout the manuscript. These colophons frequently contain images of fruit or vegetation, and are some of the earliest examples of manuscript illumination to survive.

In 1621 the codex was brought to Constantinople by Cyril Lucar, who was first a patriarch of Alexandria, then later a patriarch of Constantinople. "Lucar was involved in a complex struggle with the Turkish government, the Catholic Church, and his own subordinates. He was supported by English government and presented the codex to James I in 1624, as a gratitude for his help. The codex was presented through the hands of Thomas Roe, . . . the English ambassador at the court of the Sultan. King James died before the manuscript started for England, and the offer was transferred to Charles I in 1627. It became a part of the Royal Library, British Museum and since 1973 of the British Library. It was saved from the fire at Ashburnham House (the Cotton library) on 23 October 1731, by the librarian, [Richard] Bentley."

The origin and history of the manuscript is unusually complicated and unclear:

"The manuscript's original provenance is unknown. Traditionally Alexandria is pointed as a place of its origin and it is the most probable hypothesis. Cyril Lucar was the first who pointed Alexandria as the place of origin of the codex. This popular view based on an Arabic note from 13th or 14th century, on folio 1 reads: 'Bound to the Patriarchal Cell in the Fortress of Alexandria. Whoever removes it thence shall be excommunicated and cut off. Written by Athanasius the humble.' 'Athanasius the humble' is identified with Athanasius III, Patriarch of Alexandria from 1276 to 1316.

"F. C. Burkitt questioned this popular view as the first. According to Burkitt, the note reads: 'Bound to the Patriarchal Cell in the Fortress of Alexandria. He that lets it go out shall be cursed and ruined. The humble Athanasius wrote (this).' The manuscript had been found on Mount Athos, and the manuscript might have been taken to Egypt by Cyril in 1616, and that all the Arabic writing in the manuscript could have been inserted between that date and 1621, when Cyril was elected Ecumenical Patriarch of Constantinople. On this suppposition 'Athanasius the humble' might have been 'some person of Cyril's staff who had charge of his library'. According to Burkitt's view the codex was found on Athos, but it was written in Constantinople, because it represents a Constantinopolitan text (now known as the Byzantine text). This hypothesis was supported by Kirsopp Lake.

"Frederic G. Kenyon opposed to the Burkitt's view and argued that Cyril firmly believed in the Egyptian origin of the codex. A. S. Fulton, the Keeper of the Department of Oriental Printed Books and Manuscripts (in the British Museum), in 1938 re-examined the Athanasius note, and gave it as his opinion that on palaeographical grounds it could be dated 13th to 14th century and that the 17th century was excluded. In 1945 T. D. Moschonas published a catalogue of the library of the Patriarch of Alexandria, in which he printed two Greek notes, both from 10th century manuscripts of John Chrysostom, inserted by the Patriarch Athanasius III. The two notes must have been written between 1308 and 1316. Although the note in the Codex Alexandrinus is entirely in Arabic, and therefore no identity of hand the Greek notes can be expected, the similarity of wording leaves no doubt that this also is the work of Athanasius III.

"According to Skeat the note in the codex indicated that the manuscript had not previously been in the Patriarchal Library in Alexandria. The manuscript was carried from Constantinople to Alexandria between 1308 and 1316, together with two mentioned above manuscripts of Chrysostom. It remained in Alexandria until 1621, when Cyril removed it once to Constantinople. Whether was originally written in Constantinople or in Alexandria, is another question. Skeat did not try to give the answer on this question ('if any future scholar wishes to claim a Constantinopolitan origin for the Codex Alexandrinus, it is at least open to him to do so'). This view was supported by McKendrick, who proposes an Ephesian provenance of the codex.

"A 17th century Latin note on a flyleaf (from binding in a royal library) states that the manuscript was given to a patriarchate of Alexandria in 1098 (donum dedit cubicuo Patriarchali anno 814 Martyrum), although this may well be 'merely an inaccurate attempt at deciphering the Arabic note by Athanasius' (possibly the patriarch Athanasius III). The authority for this statement is unknown." (Wikipedia article on Codex Alexandrinus, accessed 06-27-2009).

In February 2014 a digital facsimile of the codex was available from the British Library at this link.

The Form of the Manuscript Book Gradually Shifts from the Roll to the Codex
The Codex Vaticanus
The Vergilius Vaticanus, One of the Oldest Surviving Illustrated Codices
The "Chronography of 354", the Earliest Dated Codex with Full-Page Illustrations
Codex Ephaemi Rescriptus, an Early Fifth Century Palimpsest
Contantine Orders Fifty Luxurious Bibles for the Churches of Constantinople