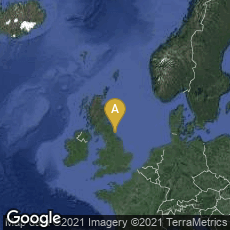 The Ceolfrid Bible, a Surviving Fragment 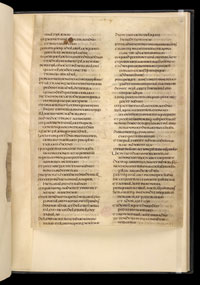 The Ceolfrid Bible, a fragment of a late 7th or early 8th century Bible, is almost certainly a portion of one of the three single-volume Bibles ordered made by Ceolfrid (Ceolfrith), Abbot of Monkwearmouth-Jarrow. It is closely related to the Codex Amiatinus, which is the only surviving complete Bible of the three ordered by Ceolfrid. The eleven surviving vellum leaves of the manuscript contain portions of the Latin Vulgate text of the third and fourth Books of Kings. The manuscript is preserved in the British Library (MS Add. 45025). In February 2014 a digital facsimile was available at this link.

"An additional single leaf, now in the British Library (Add. MS 37777) contains the another portion of the Third Book of Kings and shares all of the similarities shared by the Ceolfrid Bible and the Codex Amiatinus. This leaf almost certainly is either also from the Ceolfrid Bible or from the third Bible ordered made by Ceolfrid.

"The leaves of the Ceolfrid Bible were used in the 16th century as covers for the Chartulary of the lands of the Willoughby family. They were afterwards preserved at Wollaton Hall in Nottinghamshire. Additional MS 37777 was discovered by Rev. William Greenwell in Newcastle" (Wikipedia article on Ceolfrid Bible, accessed 01-30-2010).

The script of the Ceolfrid Bible and MS 37777 are thought to have originated in the same scriptorium as the Codex Amiatinus.

"It is recorded by Bede that Ceolfrid had two other copies of the Bible made, besides that which he took as a gift to the Pope. In 1909 a single leaf, in writing closely resembling that of the Amiatinus, was discovered by the Rev. W. Greenwell in a curiosity shop in Newcastle, and within this last year eleven more leaves, which had been utilised to form the covers of estate accounts in the north of England, were . . . secured for the nation. All twelve leaves, which include parts of 1 and 2 Kings, and unquestionably form part of one of the sister codices of the Amiatinus, are now in the British Museum, where they are a monument of the time when, under the leadership of Benedict Biscop, Ceolfrid, and especially Bede, the north of England led the Western world in scholarship" (Kenyon, Our Bible & the Ancient Manuscripts 4th Ed. [1939] 175).