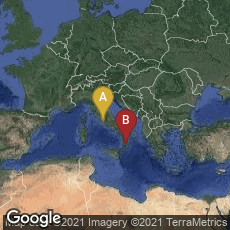 Cassiodorus Founds the Scriptorium and Library at the Vivarium 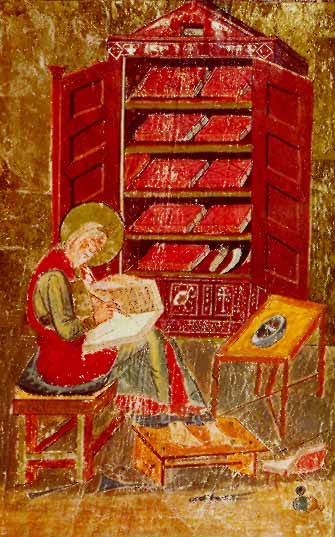 About 560, after the execution of Boethius, Roman statesman Magnus Aurelius Cassiodorus Senator (generally known as Cassiodorus) retired and formed a school and monastery at his estate at Squillace in the far south of Italy. He named it the Vivarium, after the fishponds which were a "feature of its civilized lifestyle." The monastery included a purpose-built scriptorium intended to collect, copy, and preserve texts. Former magister officiorum to Theodoric, the Ostrogothic ruler of Rome, Cassiodorus lived in the twilight of Late Antiquity. His Vivarium was the last effort, at the very close of the Classical period, to bring Greek learning to Latin readers, a concern shared by Boethius who had been executed in 524.

Prior to founding the Vivarium, Cassiodorus, along with Pope Agapetus I had desired to found a seminary modeled after the School of Nisibis, about which Cassiodorus had learned in Constantinople from the Quaestor Junillus. However, resources were insufficient for such a large project.

"Cassiodorus was not so much concerned with preserving ancient literature as with educating Christian clerics. But he saw, as Augustine had seen, that a grounding in the traditional liberal arts was a necessary preliminary to the interpretation and understanding of the Bible. This program of study, set out in his treatise on divine and secular learning, Institutiones divinarum et saecularium literarum, necessarily involved a supply of books and the foundation of a library. His monks were enjoined to copy manuscripts as an act of piety, paying close attention the accuracy and presentation of their handiwork. Pagan works stood on the shelves as ancillary to Christian studies, The library of Cassiodorus, apparently arranged by subject in at least ten armaria (book cupboards), is the only sixth-century example of which there is definite knowledge.

"The monastery of Vivarium and its library seem not to have long survived the death of Cassiodrus circa 580, but amid growing political distintegration and cultural decay it set an example that was widely followed elsewhere (M. Davies, "Medieval Libraries" in D. Stam (ed.) International Dictionary of Library Histories I [2001] 104-5).

At the Vivarium Cassiodorus had monks produce a vast pandect of the bible called the Codex Grandior. He also had them copy out nine volumes of his own work, Institutiones divinarum et saecularium litterarum. "Along with detailed instruction for a religious routine, the author told how manuscripts should be handled, corrected, copied, and repaired, and included what amounted to an annotated bibliography of the best literature of the time " (Harris, History of Libraries in the Western World 4th ed [1999] 91).

Cassiodorus also stated "that biblical manuscripts should be bound in covers worthy of their contents, and he added that he had provided a pattern book with specimens of different kinds of bindings"  (Graham Pollard, Early Bookbinding Manuals [1984] 1). This may be the earliest detailed reference to bookbinding.

"From his [Cassiodorus's] writings we know that the library founded by him possessed 231 codices of 92 different authors, amongst which were five codices on medical subjects, including the works of Hippocrates, Galen, Dioscorides, Celsus and Coelius Aurelianus" (Capparoni, "Magistri Salernitani Nondum Cogniti". A Contribution to the History of the Medical School of Salerno. [1923] 3).

After the death of Cassiodorus the manuscripts at the Vivarium were dispersed, though some of them found their way into the library maintained at the Lateran Palace in Rome by the Popes.

The image is from the Codex Amiatinus, which is thought to be based upon Cassiodorus' Codex Grandior.