This colored image of a ship with armed soldiers comes from a manuscript on vellum of Valturio's De re militari produced about 1467, before the printed edition. British Library MS 24945 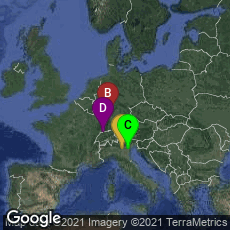 "De re militari", the First Printed Book on Technology with the First Woodcuts on a Scientific or Technological Subject Woodcut 15 in the first printed edition of Valturio's De re militari (1472) from the copy in the Bayerische Staatsbibliothek.

In 1472 printer Johannes Nicolai de Verona issued from Verona, Italy, the first printed edition of Roberto Valturio's (Valturius's) De re militari, a work which first circulated in manuscript circa 1455-1460. Some of the later extant manuscripts appear to have been copied from the printed edition, reflecting the interplay between printed book and manuscript production in the first decades of printing. As Valturio lived until 1475, his De re militari has also been called the first printed book by a living author. It vies for that title with Paolo Bagellardo's De infantium aegritudinibus et remediis issued from Padua, also in 1472.

Valturio's work was the first book printed in Verona, the second Italian book printed with illustrations, and the first book printed with woodcuts by Italian artists. Depending on how the counts are made, the book contains at least 90 woodcuts, though because some of the images are composite it is possible to arrive at a higher count. The images were printed in blank spaces left on the page, presumably after the text was printed, using a thinner ink. Some pages in the edition remain blank.

". . . the illustrations are the first true Italian book illustrations, probably after designs by Matteo de Pasti, the medallist and pupil of Alberti. They were preceeded in Italy only by a blockbook [cf. Essling 1] and the 1467 Rome edition of Torquemada which contains a series of rather crude woodcuts probably designed under German influence” (Printing and the Mind of Man No. 10).

From the scientific standpoint  Valturio's work was first printed book on technology, with the first scientific or technological illustrations— in this case woodcuts of war machines. In Prints and Visual Communication (1953; 32) William Ivins pointed out that these woodcuts were the first dated set of book illustrations made for "informational" rather than decorative or religious purposes.

The images in Valturio's book . . ."the majority of which are in Book X, consist of representations of weapons, war chariots, siege engines, canons, flags, water floats, bridges and pontoons and much else. . . . They depend on a tradition of military illustration, which extends from the late Roman Empire, the best-known text being the De rebus bellicis of the 4th century, to Byzantine and Western medieval texts. The text of the De rebus bellicis was rediscovered in an illustrated manuscript of 9th- or 10th-century date in the library of the Cathedral of Speyer, and it was copied for the book collector and humanist Bishop of Padua, Pietro Donato, during the Council of Basel in 1436. These illustrations, in one or another of the various copies made of them, are likely to have been among the sources for the illustrations in the Valturio text. Two other relevant texts concerning military equipment, both illustrated, are those by Konrad Kyeser of Eichstätt, written shortly after 1400, and Mariano Taccola of Siena, known in various versions dating from c. 1427 to 1449“ (Alexander [ed.] The Painted Page. Italian Renaissance Book Illumination 1450-1550 [1994] No. 63). Alexander describes an illustrates a manuscript written circa 1475-80, of Valturio (Munich, Bayerisch Staatsbibliothek, CLM 23467) which, "is a direct copy of the printed edition. The illustrations also are clearly copied from the woodcuts."

"A secretary to Pope Eugene IV, then adviser to Sigismondo Pandolfo Malatesta, humanist Roberto Valturio is chiefly known for his treatise on warfare, De re militari, of 1455. The work celebrates the military prowess of Malatesta, who sent copies to Mathias Corvinus, Francesco Sforza, Sultan Mohammed II, and perhaps also King Louis XI of France and Lorenzo de Medici. The illustrations are probably the work of Matteo de Pasti, who built the church of San Francesco in Rimini on the model prescribed by Leon Battista Alberti. Matteo also often drew inspiration from the treatises of Guido da Vigevano, Conrad Kyeser, and Taccola" (website of the Institute and Museum of the History of Science in Florence, where you can also watch a brief video about Valturio in Italian, accessed 01-15-2009).

ISTC no. iv00088000. In November 2013 a digital facsimile of the 1472 edition was available from the Bayerische Staatsbibliothek at this link.

On February 13, 1483 printer Boninus de Boninis, de Ragusia of Verona issued a second edition of Valturio's De re militari in Latin (ISTC no. iv00089000), followed 4 days later by his Opera dell' arte militare, translated into Italian by Paolo Ramusio on February 17, 1483 (ISTC no. iv00090000).  The Italian translation is the first illustrated book on technology published in a vernacular.

In November 2013 a digital facsimile of the 1483 edition was available from the Bayerische Staatsbibliothek at this link.

Dibner, Heralds of Science, no. 172 (citing an incomplete copy of the first edition).

Notitia Dignitatum, One of the Few Surviving Sources for the Administrative Structure of the Late Roman Empire
The Codex Spirensis, of which Only a Single Leaf of the Original Survives
De rebus bellicis, Including Images of War Machines