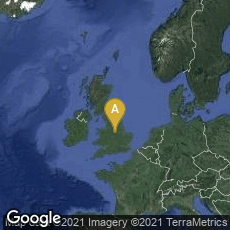 Lombe's Mill, a silk throwing mill built by Thomas Lombe on an island in the river Derwent in Derby, England from 1718-21, was the first successful powered continuous production unit in the world, and the model for the factory concept later developed by Richard Arkwright and others in the Industrial Revolution.

The mill seems to have been the result of early industrial espionage. Silk weaving technology had evolved in Italy since the thirteenth century. The Italians had developed two machines-- a throwing machine and a doubler-- capable of winding the silk onto bobbins while putting a twist in the thread.

"They called the throwing machine, a filatoio, and the doubler, a torcitoio. There is an illustration of a circular handpowered throwing machine drawn in 1487 with 32 spindles. The first evidence of a externally powered filatoio comes from the thirteenth century, and the earliest illustration from around 1500. Filatorios and torcitoios contained parallel circular frames that revolved round each other on a central axis. The speed of the relative rotation determined the twist. Silk would only cooperate in the process if the temperature and humidity were high, in Italy the temperature was elevated by sunlight but in Derby the mill had to be heated, and the heat evenly distributed." (Wikipedia article on Lombe's Mill, accessed 09-30-2012).

About 1715 Thomas Lombe's brother John obtained employment at one of the Italian shops where the secret silk-throwing machinery was used. As the story goes, John stole into the shops at night and carefully diagrammed them by candlelight. He brought the designs back to England in 1716. In 1718 Thomas obtained British patent No. 422 for "A New Invention of Three Sorts of Engines never before made or used in Great Britaine, One to Wind the Finest Raw Silk, Another to Spin, and the Other to Twist the Finest Italian Raw Slik into Organzine in great Perfection, which was never before done in this Kingdom."

"Little of the original mill remain. It is known from written sources that it was five storeys high rectangular in plan. It was built of brick, in flemish bond, being 33.5m long by 12m wide. It was built on a series of stone arches that allowed the waters of the River Derwent to flow through. The mill was 17m high,topped by a shallow pitched roof.The throwing machines were two storeys high, and pierced the first floor. The winding machines were situated on the top three floors. All the machines were powered by Sorocolds external undershot waterwheel- one that was 7m in diameter and 2m in width. Its axle entered the mill through a navel hole at first floor level. It drove a vertical shaft which was 0.45m square. This drove a horizontal shaft or lay shaft that ran the length of the mill. The torcitoios and filatoios took their power from this shaft. The vertical shaft was extended past the second floor by an iron gudgeon to a further vertical shaft that reached the top 3 floors to drive the winding machines. The mill needed to be heated in order to process the silk and this was explained in the 1718 patent. It was reported in 1732 that Lombe used a fire engine (steam engine) to pump hot air round the mill. The stair column was 19.5m high, its layout is not known and there is no information on how bales were hoisted between the floors" (Wikipedia article on Lombe's Mill, accessed 09-30-2012).