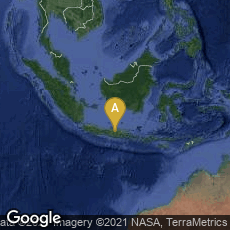 In 1891 Dutch physician, paleoanthropologist and geologist Eugène Dubois discovered a fossil skullcap, femur and a few teeth at Trinil - Ngawi Regency on the banks of the Solo River in East Java, Indonesia. Dubois characterized this specimen as a species "between humans and apes," naming it Pithecanthropus erectus (ape-human that stands upright). Prior to Dubois human fossils such as Neanderthal 1 and Cro-Magnon had been discovered by accident; Dubois was the first scientist to set out to discover prehistoric human fossils, and for his controversial discovery of Pithecanthropus erectus he received great fame and notoriety.

In 1936 a more complete specimen of Pithecanthropus erectus was discovered by German-born paleontologist and geologist G. H. R. von Koenigswald in the village of Sangiran, Central Java, 18 km to the north of Solo.

"Until older human remains were discovered in the Great Rift Valley in Kenya, Dubois' and Koenigswald's discoveries were the oldest hominid remains ever found. Some scientists of the day suggested Dubois' Java Man as a potential intermediate form between modern humans and the common ancestor we share with the other great apes. The current consensus of anthropologists is that the direct ancestors of modern humans were African populations of Homo erectus (possibly Homo ergaster), rather than the Asian populations exemplified by Java Man and Peking Man. Dubois' specimen was later classified as Homo erectus, a species that lived throught most of the Pleistocene epoch, originating in Africa and spreading as far as England, Georgia, India, Sri Lanka, China and Java" (Wikipedia article on Java Man, accessed 08-21-2013).