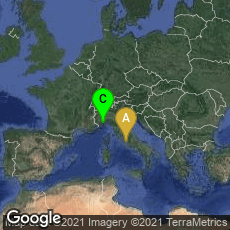 Five years after Fortunato Depero issued his sensational Depero futurista, a "mechanical" book full of futurist poetry and graphics that featured a binding held together with two machined bolts, in 1932 Italian poet and editor Filippo Tommaso Marinetti introduced his definitive model of the mechanical book, Parole in libertà: olfattive, tattili, termiche—a collection of his poetry, designed by futurist artist Tullio Mazzoti, better known by his pseudonym, Tullio d'Albisola, and produced by industrialist Vincenzo Nosenzo. Nosenzo owned a tin can factory in Zinola, a suburb of Savona, and had perfected and patented a method of lithographing on tin, called "lito-latta," the English translation of which would be "lithotin." Publication was shared by Nosenzo's firm, Lito-Latta in Savona (Nosenzo's imprint), which was responsible for the book's production, and Marinetti's Futurist publishing house "Poesia" in Rome. Thus, while Depero's book was printed on paper, Marinetti's book was printed entirely on tin sheets, reflective of the materials and textures of the Machine Age. It was also intended to be an imperishable book. The book's content was also innovative, as Marinetti introduced new references between words and physical interaction with olfactory, tactile, and thermal sensations.

Copies of Marinetti's metal book weigh 852 grams, not including the slipcase. Though dimensions apparently vary from copy to copy, its 15 sheets of tin are typically 24 x 24 centimeters, bound with a tubular aluminum spine, on which they rotate on metal wire spindles attached at head and foot—a feat of book engineering credited to Nosenzo. The tin leaves are extremely thin (no more than 1 mm each), and to prevent cuts they are very slightly folded on their edges.

"Notwithstanding its unusual components and the originality of Tullio's design, the Metal Book features all the elements we expect to find in a book. It has a front and a back cover, the front cover doubling as a title page; three preliminary 'leaves,' including copyright page, frontispiece, and dedication page (not necessarily found in this order from copy to copy); a body of text, comprising nine leaves printed on both sides; and an advertisement and table of contents at the end. None of the 28 'pages' is paginated" (Vincent Giroud, Parole in Liberta. Marinetti's Metal Book. Berkeley: Codex Foundation Code(x) +2 Monograph Series No. 1, 2012).

The edition was 101 unnumbered copies, of which 50 were for sale, and the rest for presentation. "A unique copy was printed on paper, comprising a different title page (with the imprint of the Edizioni Futuriste di 'Poesi'), the copyright page, a different frontispiece portrait of Marinett (wearing his Accademia d'Italia uniform), the deication page, the nine poems as printed in the Metal Book (but without any of the typographical plates), and the table. Measuring 34 x 31.5 cm., this unicum is bound in a full red and green leather binding held together, in the manner of Depero futurista, with five bolts— one of which is now missing. Destined for Marinetti, and inscribed to him by Tullio and Nosenzo on 5 December 1932, it is now in the Beinecke Library, where a significant part of Marinetti's library now rests" (Giroud, op.cit., 20-21).

In January 2014 digital images of Yale's complete tin copy were available from the Beinicke Library at this link.

As a companion to Giroud's study of Marinetti's Metal Book, fine printer Peter Koch and the Codex Foundation also issued in 2012, as No. 2 in the Code(x) +2 Monograph Series, a reduced-format color reproduction of the copy at Yale. The reproduction is entirely printed on black paper to emphasize the metallic aspects. This also reproduces the very rare slipcase, missing from some copies. In my opinion Giroud's 22-page essay, and its companion reproduction, are among the most interesting studies of an individual publication.