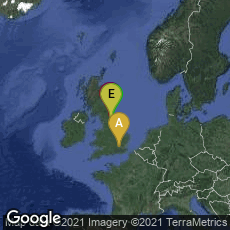 Uncredited image of a seal designed in 1821 before Stephenson developed the Locomotion No. 1, and published in Tomlinson, The North Eastern Railway; its rise and development (1915) p. 73.

On September 27, 1825 British engineer George Stephenson's Locomotion No. 1 (originally named Active), hawled its first train on the Stockton and Darlington Railway (S&DR). The S&DR was the first publically subscribed passenger railroad, though it did not technically carry passengers under steam until 1833.

"The world's first public railway to use steam locomotives,[1] its first line connected collieries near Shildon with Stockton-on-Tees and Darlington....The movement of coal to ships rapidly became a lucrative business, and the line was soon extended to a new port and town at Middlesbrough. While coal waggons were hauled by steam locomotives from the start, passengers were carried in coaches drawn by horses until carriages hauled by steam locomotives were introduced in 1833" (Wikipedia article on Stockton and Darlington Railway, accessed 11-11-2018).

One of the significant results of the success of the Stockton and Darlington project was the extent to which it gave support to plans for building a railway between Liverpool and Manchester.