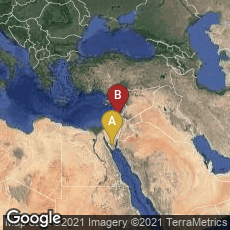 An opening of the Codex Sinaiticus from one of the two bound volumes in the British Library.

The Codex Sinaiticus (formerly known as the Codex Sinaiticus Petropolitanus) was written in Koine Greek in the mid-4th century, by at least three scribes. The codex was written in uncial majuscule in scriptio continua, without word division, punctuation or pagination; it incorporates two ancient methods for numbering its quires, and it also incorporates a version of the system of numbering the paragraphs of the Gospels developed by Eusebius of Caesarea. It was written in a four-column format except for the poetical and wisdom literature in which a two-column format was used. This is the only surviving biblical manuscript employing the four-column page format, and it has been suggested that this is reminiscent of the papyrus roll format rather than the codex. It is thought that the codex was written somewhere in Asia Minor, Palestine (Caesarea?) or Egypt.

Originally the Codex Sinaiticus contained the Old Testament, according to the canon of the Greek Septuagint, including the books known in English as the Apocrypha, (but without 2 and 3 Maccabees), along with the New Testament and two other early Christian books—the Shepherd of Hermas and the Epistle of Barnabas. The complete codex originally consisted of at least 97 quires, each containing 8 leaves or 16 pages, incorporating a total of 776 leaves. In its current form the codex comprises just over 400 leaves, each of which measure 380 mm (15 in.) high by 345 mm (13.5 in.) wide. In size and extent this represented a quantum leap from the papyrus codices in which early Christian documents were most typically written. Most papyrus codices are thought to have contained only one of the Gospels, and the most it is thought that could have been incorporated in the largest papyrus codex would have been the Gospels and Acts.

Compared to the smaller papyrus codices, from the standpoint of book history the completion of the Codex Sinaiticus on parchment may represent an achievement comparable to Gutenberg's invention of printing by movable type more than 1000 years later. However, just over half of the original book survived, now dispersed between four institutions: St Catherine's Monastery in Sinai (where the manuscript was discovered), the British Library, Leipzig University Library, and the National Library of Russia in St. Petersburg. At the British Library the largest surviving portion - 347 leaves, or 694 pages - includes the whole of the New Testament. The other institutions hold portions of the Septuagint, which also survived almost complete, plus the Epistle of Barnabas, and portions of The Shepherd of Hermas.

After his conversion to Christianity the Emperor Constantine  commissioned fifty Greek Bibles for the churches of his new capitol, Constantinople, and ever sincer the Codex Sinaiticus was discovered it was speculated that the Codex Sinaiticus was among those commissioned. However, there is no evidence to substantiate this speculation. None of the fifty copies has ever been conclusively identified.

In February 2014 a digital facsimile of the Codex and podcasts about the manuscript were available from the British Library at this link.

All surviving portions of the Codex were joined in a virtual electronic edition at Codexsinaiticus.org.

♦ Please use the exact phrase Codex Sinaiticus in the keyword search on this website to locate several other entries in this database pertinent to this codex as it appears in book history over the centuries.

For a general guide to the codex see  Parker, Codex Sinaiticus. The Story of the World's Oldest Bible (2010).

♦ It is one thing to write about a book; it is another thing altogether to see it and handle it; I would never even dream of being allowed to handle this priceless volume. However, in February 2014 I acquired through Amazon.com the full color facsimile edition of the Codex Sinaiticus published by the British Library and Henrickson Publishers in 2010. I noticed this facsimile when it was originally advertised, but resisted purchasing. Then, when it appeared that the facsimile was being remaindered, I acquired a new copy for only $300, plus only $3.99 shipping. I emphasize only $3.99 because the facsimile in its double shipping box weighed 15.5 kg or over 35 pounds, and even though it was sent by media mail, the seller obviously had to pay far more to ship it than Amazon would allow them to charge. Like the priceless original codex, the facsimile is a stunningly impressive volume 43 x 35.5 cm, very finely printed on heavy art paper, and very sturdily bound in a strong slipcase. The volume is 8.5 cm thick. The "Reference Guide" included with the volume indicates that the publishers had to reduce the images of the pages very slightly, by approximately 5%, "to bring the pages down to the maximum size which could be bound by machine." Inevitably, no printed facsimile will represent the original manuscript exactly, and it is probable that the publishers adjusted the values of some pages to improve reading clarity. However, through hefting this volume and paging through it one can get a sense of the magnificent physicality of the achievement that is the Codex Sinaiticus.

Pamphilus Establishes a Library and Scriptorium, and is Executed During the Diocletianic Persecution of Christians
Celtic Monks Illuminate the Book of Kells
Ratdolt's Edition of Eusebius's "Chronicon" Contains One of the Earliest Acknowledgments of Gutenberg's Invention
The Codex Beneventanus, From the Libraries of Richard Mead and Anthony Askew
Eusebius Establishes the Eusebian Sections, One of the Earliest, Most Widely-Used Cross-Indexing Systems
Eusebius Introduces his Tabular Timeline System
Eusebius's Historia Ecclesiastica, the First Full Length Historical Narrative Written from the Christian Point of View
The Persecution, Imprisonment and Torture of Origen; its Consequences for his Library
Reconstruction of the Contents of the Library of Eusebius

Fust Files a Lawsuit against Gutenberg to Recover Money Used for the "Work of the Books": The Helmasperger Notarial Instrument
Ratdolt's Edition of Eusebius's "Chronicon" Contains One of the Earliest Acknowledgments of Gutenberg's Invention
The Fitzwilliam Museum Exhibition of Printing, Precursor to "Printing and the Mind of Man" is Aborted on Account of War
Donald Knuth Creates TeX and Metafont
Johan Christoph Wolf Issues the First Bibliography of the History of Printing
Early English Critiques of the Quality of Machine Printing