Nick Wilding at the National Central Library of Florence in Florence. Title page of an authentic copy of the first edition of Galileo's Sidereus nuncius with an authentic presentation inscription signed by Galileo to a poet in the Medici court.  Courtesy of the University of Oklahoma Libraries, College of Arts and Sciences Online. 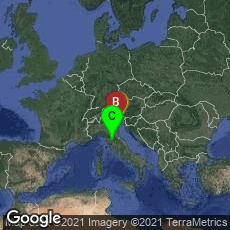 Galileo Issues Images of Revolutionary Discoveries Concerning the Universe; and the Story of a Remarkable Forgery After learning in 1609 that a Dutchman, Hans Lippershey, had invented an instrument that made faraway objects appear closer, Italian scientist Galileo Galilei, a resident of Padua, applied himself to discovering the principle behind this instrument. By late in 1609 he built a telescope of about thirty power. This he probably first turned to the heavens in November or December 1609, with astronishing and revolutionary results. In contradiction to the doctrines of Aristotle and Ptolemy, which taught that the celestrial sphere and its planets and stars were perfect and unchanging, Galileo's telescope showed that the surface of the moon was rough and mountainous, and the Milky way was composed of thickly clustered stars. In November or December 1609 Galileo painted six watercolors on a notebook page showing the phases of the moon, as he observed them through the telescope. These images, on a sheet preserved in Florence, at the Biblioteca Nazionale Centrale (Ms. Gal. 48, f. 28r), were the first realistic images of the moon, and the first recorded images of bodies beyond the earth seen by man.

On the night of January 7, 2010 Galileo set up a telescope on his balcony in Padua. He spotted three stars near Jupiter, and noted their positions in a notebook. Six days later Galileo returned to his telescope and found the same stars, but by then their position had changed. At that point he realized that the three stars were moons orbiting Jupiter— proof that the universe of stars was not fixed, as postulated by Ptolemy's geocentric theory, and evidence for Copernicanism. Three months later Galileo's Sidereus Nuncius, or Starry Messenger, was published in Venice in an edition of 550 copies. The Sidereus Nuncius described and illustrated with copperplate engravings the first astronomical observations made through a telescope. Publication of the book was extremely rapid and variants in the issue suggest that Galileo might have been developing his ideas while the book was being printed. Its images provided revolutionary new information about the universe. Though it contained only the bare facts of Galileo's observations without any overt reference to the Copernican theory, Sidereus Nuncius aroused a sensation among the European learned community, for it provided the first hard evidence that the Aristotelian-Ptolemaic view of the universe contained inaccuracies.

"He sent a copy of the book, along with the telescope he had been using, to the Grand Duke of Tuscany Cosimo II de’ Medici. Dr. [Owen] Gingerich said the pamphlet amounted to 'a job application' to the Medici family for whom, in one of history’s first examples of branding, Galileo named the four satellites of Jupiter. 'Other planets were gods or goddesses,' said Paolo Galluzzi, director of the Florence institute. 'The only humans with position in sky were Medicis.' The ploy worked, Cosimo II hired Galileo as his astronomer, elevating him from a poorly paid professor at the University of Padua to a celebrity, making the equivalent of $300,000, a year, Dr. Galluzzi said. Galileo returned the favor by giving Cosimo another telescope, clad in red leather and stamped with decorations" (Dennis Overbye, "A Telescope to the Past as Galileo Visits the U.S.", The New York Times, March 27, 2009.)

It is thought that Galileo built dozens of telescopes, of which two survive, both in the Institute for the History of Science (Museo Galileo) in Florence, Italy. One covered in decorated leather, which Galileo sent to Grand Duke Cosimo II de' Medici, retains only one of its original lenses, but the other, covered only in varnished paper, contains its original functioning optics, and has its focal length labeled in Galileo's handwriting on the outside of its tube. This telescope was loaned to the Franklin Institute in Philadelphia for an exhibition from April to September 2009. (The online article in The New York Times included a video showing the original telescope being unpacked in Philadelphia.)

In June 2005 antiquarian bookseller Richard Lan (Martayan-Lan, Inc.) purchased a copy of the Sidereus nuncius from Marino Massimo De Caro and antiquarian bookseller Filippo Rotundo that was represented as a proof copy, signed by Galileo, originally from the library of Federico Cesi, founder of the Accademia dei Lincei. Instead of copperplate engraved illustrations as in other copies of the book, this copy contained watercolors of the phases of the moon similar to those which Galileo made at the end of 1609 and which are preserved in Florence. It was known that the Venetian printer had sent Galileo thirty copies with blank spaces indicating where etchings would be placed. Presumably this was one of those copies, in which Galileo had personally painted images for presentation to Federico Cesi, instead of having engravings printed in. The copy was examined by all the leading authorities, subjected to various tests, and was generally considered a unique proof copy.

The Martayan Lan copy was included in the discussions in a symposium convened at the Library of Congress in November 2010 entitled "Galileo's Moons," intended to celebrate the 400th anniversary of the Sidereus Nuncius and the acquisition by the Library of Congress of an uncut copy of the first edition bound in the original limp paper boards. Papers presented at this symposium accepted the authenticity of the Martayan Lan copy.

In 2011 De Gruyter published a rather grand 2-volume set, fully illustrated in color, based on research begun in 2007. Volume one, edited by Irene Brückle and Oliver Hahn, was entitled Galileo's Sidereus Nuncius. A comparison of the proof copy (New York) with other paradigmatic copies. Volume two, written by Paul Needham, was entitled Galileo Makes a Book. The First Edition of Sidereus Nuncius, Venice 1610. Regarding the significance of Needham's study, I quote from the review by G. Thomas Tanselle, Common Knowledge, 19, #3, (Fall 2013), 575-576:

"Needham’s book is based on eighty-three other copies, and he draws as well on Galileo’s letters, drafts, and various external documents. The result is a detailed account of the early months of 1610, from January 15, when Galileo decided he must publish his discoveries, to March 13, when the printing was completed; an additional chapter discusses the book’s distribution and Galileo’s corrections in some copies. The task of bibliography, as stated by Needham, is to know “the materials and human actions that produced (in multiple copies) the structure of a printed book.” Systematically he takes up the paper, type, and format of Sidereus Nuncius and provides a quire-by-quire analysis of its production, making exemplary use of many techniques of bibliographical analysis, each patiently and clearly explained, with accompanying illustrations. The book could serve as an excellent introduction to this kind of work; but even more remarkably, it demonstrates how interconnected are the physical object and its intellectual content. The title sentence, “Galileo makes a book,” has a double meaning: not only did Galileo write the text, but he also attended to its physical production, making the presentation of the text integral to its meaning. Needham does not neglect Galileo’s writing itself: he calls Galileo “an artist with words,” whose “prose embodies not just close reasoning, but also life and emotion.”

"This assessment applies equally to Needham’s own writing, which combines rigorous but readable technical analysis with an awareness of the human side of that work and the story it reveals. This combination recalls an earlier bibliographical classic, Allan Stevenson’s The Problem of the Missale Speciale (1967), another full-length treatment of a single book. Even the sense of humor displayed by Stevenson has its counterpart here: when, for example, Needham explains two hypotheses as to when the printing of Galileo’s book began, he calls the one that postulates a later date “the dilatory view.” At the end Needham praises the many nameless actors, such as papermakers and printing-shop workers, who played roles in the story; and he closes with “the mules and oxen whose humble labor moved sheets of Sidereus Nuncius across the face of Europe, under the eyes of the boundless sky.” This passage, occurring in a work of bibliographical analysis, epitomizes the work’s unusual accomplishment: it breaks new ground in the study of a major book, sets forth its discoveries in an engaging narrative, and in the process shows how bibliography can be essential to intellectual history."

Until early 2012 Richard Lan was privately offering the copy for sale for $10,000,000. Then Nick Wilding, an historian of science at Georgia State University who had been asked to review the 2-volume set mentioned above, presented concrete proof that the Martayan-Lan copy was a forgery:

Slowly the thread of fabrication began to unravel. Discovery of the forgery coincided with the exposure of massive thefts of rare books from the Girolomini Library in Naples, for which Marino Massimo De Caro, and others were eventually convicted. In 2013 the Library of Congress and Levenger Press issued Galileo Galilei, The Starry Messenger, Venice, 1610. From Doubt to Astonishment. This volume contained a facsimile edition of the Library of Congress copy, an English translation, and the text of the papers delivered at the November 2010 symposium. However, as the editor of the volume noted, Paul Needham revised his paper (now retitled "Authenticity and Facsimile: Gaileo's Paper Trail") in light of his later acceptance that the Martayan Lan copy was a forgery. On December 16, 2013 The New Yorker magazine published a detailed background article on the forgery and how it was accomplished, by Nicholas Schmidel: "A Very Rare Book. The mystery surrounding a copy of Gaileo's pivotal treatise." While the article filled in many blanks concerning the Sidereus Nuncius forgery, it raised other questions concerning other unknown thefts and forgeries by Marino Massimo de Caro and his associates.

In February 2014 De Gruyter issued an originally unintended volume three of their 2011 two-volume set entitled A Galileo Forgery. Unmasking the New York Sidereus Nuncius, edited by Horst Bredekamp, Irëne Bruckel, and Paul Needham. When I last revised this entry in August 2014 the full text of the volume was available as an Open Access PDF at no charge. This was the most comprehensive account and proof of the forgery. In many ways it was the most remarkable and admirable volume of the set, in which the scholars, recounted how the forgery was discovered, drew their final conclusions proving the forgery, and explained how they had been deceived in the first place.

A more detailed publication by Nick Wilding on the  Siderius nuncius forgery was "Forging the Moon", Proceedings of the American Philosophical Society, 160 (2016) 37-72.

On July 2, 2019 PBS broadcast a dramatic 55 minute account of Nick Wilding's research and exposure of the forgery in their video, Secrets of the Dead: Galileo's Moon.