Jeremy Norman Collection of Images -&nbspCreative Commons
The embossed cuneiform script is visible toward the bottom edge of the front cover below the hooves of the bull. 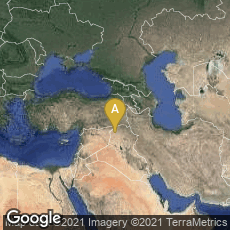 Layard's Discoveries in Nineveh and Babylon: One of the Most Remarkable Publisher's Cloth Bindings of the 19th Century Jeremy Norman Collection of Images -&nbspCreative Commons
In 1853 English traveller, archaeologist, cuneiformist, art historian, draughtsman, collector, politician and diplomat Austen Henry Layard  published Discoveries in the Ruins of Nineveh and Babylon; with Travels in Armenia, Kurdistan and the Desert: Being the Result of a Second Expedition undertaken for the Trustees of the British Museum. In this work, which has been called one of the best-written books of travel in the English language, Layard described the results of his investigations of the ruins of Babylon and the mounds of southern Mesopotomia. Until Layard's exploration, the identification of the site of Nineveh had long perplexed various archeologists. Among the many discoveries made during this expedition one of the most notable was the Library of Ashurbanipal. In addition Layard sent to London many of the specimens that form the collection of Assyrian antiquities in the British Museum.

The Epic of Gilgamesh, Probable Source of Aspects of Biblical and Homeric Literature