Image 14, portrait of Charles the Bold, in the Bayerische Staatsbibliothek digital facsimile of Codex Aureus of St. Emmeram This monograph on the Codex Aureus of St. Emmeram was one of the earliest monographs on an illuminated manuscript and a treasure binding. 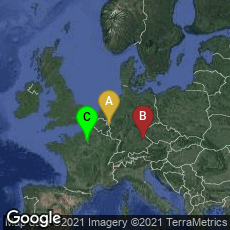 The Codex Aureus of St. Emmeram The Codex Aureus of St. Emmeram, a lavishly illuminated Gospel Book, was written on purple vellum by the monks Liuthard and Beringer for the Holy Roman Emperor Charles II (the Bald) at his Palace School. It was given by Charles to Arnulf of Carinthia, who later donated it to St. Emmeram Abbey in Regensburg, from which its name is taken. It is a very large volume measuring 420 x 330 mm. Because this was the age of itinerant courts, it has been difficult for scholars to identify the atelier where the manuscript was created, but the Basilica of St. Denis, where Charles was secular abbot from 867 to his death, has been frequently suggested.

The treasure binding on the codex, decorated with gems and repoussé relief figures in gold, is one of finest of the very few surviving from this period; it has been dated precisely to the year 870, and is probably also a product of Charles's Palace School. Though there are differences in style, the upper cover of the Lindau Gospels preserved in the Morgan Library and Museum was probably made in the same atelier.

At the center of the cover of the Codex Aureus is Christ in Majesty seated on the globe of the world and holding on his knee a book with a Latin inscription which may be translated,

"I am the way, and the truth, and the life. No man cometh to the Father, but by me."

So impressive was this volume that in 1786 it became the subject of one of the very earliest monographs on an illuminated manuscript and a treasure binding: Sanftl, Dissertatio in aureum, ac pervetustum ss. evengeliorum codcem ms. Monasterii S. Emmerami Ratisbonae. The author, Presbyter of a Benedictine monastery, professor of theology, and a librarian, dedicated this 254 page quarto volume to Pope Pius VI.  Included in the volume were three folding black & white engraved plates which illustrated the upper cover of the binding, an illuminated page of the manuscript, and the incipit to the Book of Luke in their original size.  The full-size folding engraving of the treasure binding cover drawn by J.G. C. Hendschel and engraved by Brother Klauber is a spectacular work in its own right.

The Codex Aureus is preserved in the Bayerische Staatsbibliothek, München (Clm 14000).  In November 2013 a digital facsimile of the manuscript, minus the treasure binding, was available at this link.

Walther & Wolf, Codices illustres. The world's most famous illuminated manuscripts 400 to 1600 (2005) 98-101 contains a superb color reproduction of the upper cover of the treasure binding.