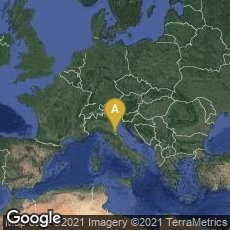 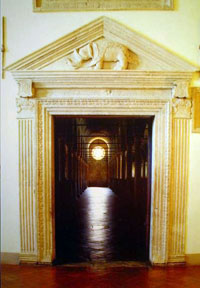 The Malatestiana Library, which I visited in September 2010, is the only monastic humanist library of which the structure, fittings and original collection of codices in their original bindings chained to the original desks, have survived almost completely intact. The main doorway was the work of the early Italian Renaissance sculptor Agostino di Duccio. The splendid walnut door carved by Cristoforo da San Giovanni in Persiceto was installed in 1454.

"The fittings are composed of 58 desks, with coat of arms at the sides. The light comes in through the 44 Venetian style windows, which were perfectly designed for reading. Inside are conserved 340 precious codexes. The 340 books concern: religion (among them, the oldest codex, an Etimologie by St Isidoro), Greek and Latin classics, sciences and medicine" (Wikipedia article on Malatestiana Library, accessed 10-30-2010).

The survival of the original library and its fixtures was probably due to the way that Malatesta Novello entrusted its care to both the Franciscans and the city of Cesena. The Franciscans originally had the idea for the library and received permission from Pope Eugene IV in 1445, and began construction in 1447. In 1450 Malatesta Novello adopted the friars' project and constructed his own library in their monastery. The inspiration for the architecture was the library of the Dominican convent of San Marco in Florence, designed by Michelozzo, which had been founded in 1444.

From 1797 to 1804 the Franciscan monastery associated with the library was used as a dormitory for Napoleonic troops occupying the city, and the library itself was stripped of its furnishings and also used as a dormitory. After Napoleon's forces left the library was restored to its original medieval condition and regained its original collections, less two incunabula which were kept by the French: the Ortographia dictionum of Tortelli and Cosmographia of Ptolemy.

Among the many distinguishing characteristics of the decoration of this library are the numerous inscriptions created at the time of its completion stating in Latin that the library was the gift of Malatesto Novello. On 1812 the remains of Malatesta Novello were moved from the church of St. Francis, already in poor condition and destined to destruction, to the middle of the back wall of the library, accompanied by this marble epigraph:

library of the Dominican convent of San Marco: