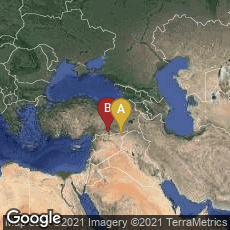 A: Mardin, Turkey, B: Şanlıurfa, Turkey Head reliquary of St. Jacob of Nisibis, Hildesheim, after 1367. Museum of the cathedral of Hildesheim, Germany.

About 350 CE the School of Nisibis (Syriac: ܐܣܟܘܠܐ ܕܢܨܝܒܝܢ) was founded in Nisibis (modern day Turkey) by Jacob of Nisibis.  The school, which had three primary departments teaching theology, philosophy, and medicine, has sometimes been called the world's first university.

"In 363, when Nisibis fell to the Persians, St. Ephrem accompanied by a number of teachers left the school. They went to the School of Edessa, where St. Ephrem took over the directorship of the school there. It had been founded as long ago as the 2nd century by the kings of the Abgar dynasty. When St. Ephrem took over the school, its importance grew still further. After the Nestorian Schism, when the Byzantine emperor Zeno ordered the school closed for its teachings of Nestorian doctrine, deemed heretical by Chalcedonian Christianity, the School moved back to Nisibis."

"The fame of this theological seminary was so great [by the sixth century] that Pope Agapetus I and Cassiodorus wished to found one in Italy of a similar kind. Although the troubled times prevented their wishes from being realized, but Cassiodorus's monastery at Vivarium was inspired by the example of Nisibis, about which he had learned from the Quaestor Junillus during his time in Constantinople" (Wikipedia article of School of Nisibis, accessed 03-04-2013).

Cassiodorus Founds the Scriptorium and Library at the Vivarium
The Codex Amiatinus: the Earliest Surviving Complete Bible in the Latin Vulgate, Containing One of the Earliest Surviving Images of Bookbindings and a Bookcase
The Church Replaces the Roman State as the Source of Order and Stability
The Saint John's Bible is Completed