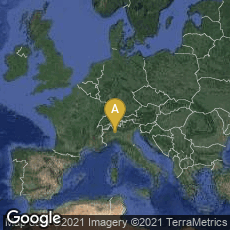 "The type in this psalter is similar to the very first Greek type ever cut. That first type was designed by calligrapher Demetrios Damilas, a Cretan of Milan. it was perhaps modelled on the hand of Michael Apostolis [Apostolios] (b. ca. 1422) a prolific scribe whose script was notable for its lack of ligatures (unlike, for example, the Greek types that would become favored by Aldus Manutius), making it an easy and readable handwriting to render into type. The type appeared first in an edition of Constantine Lascaris' Epitome (Milan, 1476), the first book printed entirely in Greek, and soon thereafter in two works issued by Bonus Accursius: a dictionary by Crastonus and an undated edition of Aesop. In about 1480, Accursius' books featured a new type, presumably because the earlier types were unavailable. This new type is a variant of the older one, but remains an upright cursive, relatively free of ligatures. The letters are larger, and there are many new letterforms introduced in this second version. This psalter is the fifth and last book Accursius printed with this type" (John E. Mustain, Monuments of Printing: Gutenberg Through the Book Arts Revival [2013] p. 30).

In 2012 Cornelia Linde published "Johannes Crastonus's 1481 Edition of the Psalms," The Library, XIII,Issue 2 pp. 147-63. doi: 10.1093/library/13.2.147.  In this paper she argued that Crastonus issued this edition of the Psalms for facilitating the learning of Greek. "On the basis of Psalm 1 and some additional examples, it explores how he employed the layout and changed the Latin text in order to achieve his goal. Furthermore, this article argues that the combination of works produced by Crastonus and his publisher Bonus Accursius were designed to provide a complete corpus for self-instruction in Greek."

The Septuagint May Have Been Produced in Alexandria
Pamphilus Establishes a Library and Scriptorium, and is Executed During the Diocletianic Persecution of Christians
The Codex Vaticanus
Ivan Fyodorov Issues First Complete Slavic Bible
Constantin von Tischendorf Discovers and Acquires the Codex Sinaiticus: Controversial and Disputed
The Codex Sinaiticus
The Vienna Genesis: the Oldest, Well-Preserved Illustrated Biblical Codex
The Council of Jamnia May Have Been Influential in the Process of Canonizing the Old Testament
The Chludov Psalter, A Byzantine Iconophile Psalter from the Time of the Iconoclasm
The Codex Alexandrinus: One of the Earliest Bible Texts with Some of the Earliest Manuscript Illumination