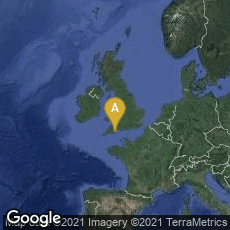 In January 1858, during the course of quarrying operations, a bone cavern, Brixham Cave, was discovered on Windmill Hill overlooking the fishing port of Brixham, Devonshire, England. Unlike Kent’s Cavern, which had been explored at least since the 1820s, and possibly earlier, Brixham Cave was a sealed find: the entrance had been blocked by limestone fragments cemented with stalagmite, and the cave’s stalagmite floor was completely intact. Under the auspices of the Royal and Geological Societies, Brixham cave was carefully explored and excavated, using a plan of operation laid down by Scottish geologist and paleontologist Hugh Falconer, with British geologist and paleontologist William Pengelly supervising the work. While the details of their first meeting have not survived, it appears to have been a congenial one, since it led to the evolution of a cooperative plan to conduct a systematic excavation of the cave. Although the declared intention of this planned investigation was to gather more precise information on the sequence of fauna in Brixham prior to modern geological times (see Falconer’s petition to the Geological Society for funds, dated 10 May 1858), in Murchison, Palaeontological Memoirs and Notes of the Late Hugh Falconer Vol. 2 [1868] 487-491), there is every reason to suppose that both Pengelly and Falconer had also harbored the prospect that this cave might yield evidence relating to the question of human antiquity.

Shortly after excavation of Brixham cave began, the first human artifact—a flint knife—was found in the cave’s “Reindeer Gallery.” In all, 36 human artifacts were found in Brixham Cave, many in association with the bones of extinct animals. Several of the scientists on the excavation team, including Pengelly and Falconer, were convinced that the artifacts were coeval with the extinct animals; others, including Joseph Prestwich, Charles Lyell and Richard Owen, took a more conservative view, noting that cave deposits could be disturbed by interior flooding. Recognizing that this dispute could not be settled by cave evidence alone, Falconer traveled to Abbeville in 1858 to study the flint artifacts discovered by Boucher de Perthes in the gravel terraces of a Somme River valley. The following year, at Falconer’s urging, Prestwich made the same journey in the company of John Evans. The evidence that he and Evans saw at Abbeville provided Prestwich with the “unmistakable corroboration” he had been seeking to establish the case for human antiquity.

The archeological excavations conducted at Brixham Cave between July 1858 and June 1859, which yielded both fossil animal bones and flint artifacts, set in motion what Scottish geologist Roderick I. Murchison called a “great and sudden revolution in modern opinion” on the issue of human antiquity. Pengelly first reported on the finds at Brixham in September 1858 at the 28th meeting of the British Association for the Advancement of Science, held at Leeds. An abbreviated version of his paper, entitled "On a Recently-Discovered Ossiferous Cavern at Brixham, near Torquay," was duly published in the BAAS proceedings in 1859.

Because Brixham Cave was so large, and the finds within it so rich, the committee of scientists took an unusual amount of time and care to complete excavation of the cave. Joseph Prestwich's report, published sixteen years after the cave was discovered, represented the definitive account of its exploration and excavation:  "Report on the Exploration of Brixham Cave, Conducted by a Committee of the Geological Society" . . . " Philosophical Transactions of the Royal Society 163, part II (1874) 471–572; 7 plates.

"From the outset, it was recognized that stratigraphic control was going to be a critical factor in this excavation, and, as such, Pengelly and [Joseph] Prestwich developed a method that would not only “avoid the risk of confounding the remains of different levels” but also ensure the proper identification and (approximate) location of all of the preserved materials, . . .  As Prestwich . . . subsequently noted, the implementation of such methods, together with the fact that the actual excavation was carefully monitored throughout by members of a committee that included some of England’s then most prestigious scientists, 'vitiated the results obtained in many other cave explorations, more especially in regard to the contested position of human industrial remains' (Spencer, History of Physical Anthropology: An Encyclopedia [1997] 215-217).

Gruber, Jacob. "Brixham Cave and the Antiquity of Man" In M.E. Spiro ed. Context and Meaning in Cultural Anthropology (1965).

Boucher de Perthes' Pioneering Treatise on the Antiquity of Man