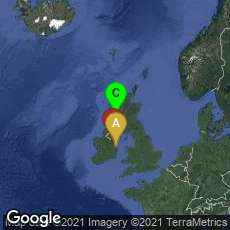 The Book of Kells.

The Book of Kells, sometimes known as the Book of Columba, contains a richly decorated copy of the Four Gospels in a Latin text based on the Vulgate edition (completed by St Jerome in 384 CE). The gospels are preceded by prefaces, summaries of the gospel narratives and concordances of gospel passages—a kind of cross-indexing system—attributed to the fourth century Roman historian, exegete, Christian polemicist and Bishop, Eusebius of Caesarea.

The book "was transcribed by Celtic monks ca. 800. The text of the Gospels is largely drawn from the Vulgate, although it also includes several passages drawn from the earlier versions of the Bible known as the Vetus Latina. It is a masterwork of Western calligraphy and represents the pinnacle of Insular illumination. It is also widely regarded as Ireland's finest national treasure."

"The illustrations and ornamentation of the Book of Kells surpass that of other Insular Gospels in extravagance and complexity. The decoration combines traditional Christian iconography with the ornate swirling motifs typical of Insular art. Figures of humans, animals and mythical beasts, together with intricate knotwork and interlacing patterns in vibrant colours, enliven the manuscript's pages. Many of these minor decorative elements are imbued with Christian symbolism and so further emphasize the themes of the major illustrations.

"The manuscript today comprises 340 folios and, since 1953, has been bound in four volumes. The leaves are on high-quality calf vellum, and the unprecedentedly elaborate ornamentation that covers them includes ten full-page illustrations and text pages that are vibrant with historiated initials and interlinear miniatures and mark the furthest extension of the anti-classical and energetic qualities of Insular art. The Insular majuscule script of the text itself appears to be the work of at least three different scribes. The lettering is in iron-gall ink, and the colors used were derived from a wide range of substances, many of which were imports from distant lands" (Wikipedia article on The Book of Kells, accessed 11-22-2008).

During the later medieval and early modern periods the Book of Kells was kept in the Abbey of Kells (Mainistir Cheanannais in Irish) in Kells, County Meath, Ireland, 40 miles north of Dublin. The Abbey is thought to have been founded in 804 by monks fleeing from St Colmcille's Iona monastery to escape Viking invasions. It is possible that The Book of Kells was produced by the monks of Iona Abbey in the years leading up to 800. It is also possible that much of the manuscript may have been created at Kells. In Insular Manuscripts 6th to the 9th Century (1978) p. 73 J. J. G. Alexander cites a theory that the manuscript might have been produced in northern England or even in the Pictish kingdom because of its similarity in layout and organization to the Lindisfarne Gospels. Clearly historians cannot be certain of the exact date and circumstances of its creation.

In February 2014 a complete digital facsimile of the Book of Kells was available from Trinity College Dublin at this link.

Pamphilus Establishes a Library and Scriptorium, and is Executed During the Diocletianic Persecution of Christians
Ratdolt's Edition of Eusebius's "Chronicon" Contains One of the Earliest Acknowledgments of Gutenberg's Invention
The Codex Sinaiticus
The Codex Beneventanus, From the Libraries of Richard Mead and Anthony Askew
Eusebius Establishes the Eusebian Sections, One of the Earliest, Most Widely-Used Cross-Indexing Systems
Eusebius Introduces his Tabular Timeline System
Eusebius's Historia Ecclesiastica, the First Full Length Historical Narrative Written from the Christian Point of View
The Persecution, Imprisonment and Torture of Origen; its Consequences for his Library
Reconstruction of the Contents of the Library of Eusebius