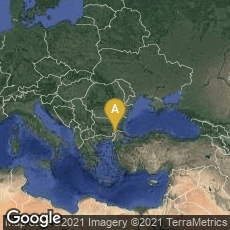 The anonymous illustrated pamphlet De rebus bellicis, which survived in the late ninth century Codex Spirensis, consists of a series of suggestions for reforming the Roman Empire. It was written after the reign of Constantine, which ended with his death on May 22, 337, but before the battle of Adrianople fought on August 9, 378 between an army of the Eastern Roman Emperor Valens and Gothic rebels.

"Reforms of Imperial financial policy, of the currency, of provincial administration, of the army, and of the law are proposed in turn. The writer describes a number of new mechanical contrivances which in his opinion ought to form part of the equipment of the Roman army. To facilitate the task of constructing them he included in his treatise coloured drawings of what these contrivances should look like when completed. More or less faithful copies of his drawings have survived in several of the manuscripts" (Thompson, A Roman Reformer and Inventor. Being a New Text of the Treatise De Rebus Bellicis with a Translation and Introduction [1952] 1).

A brief work which would have had small chance of survival on its own, De rebus bellicis survived in the Codex Spirensis, a collection of thirteen different texts, which was noticed by scholars in the early 15th century, and copied several times. Though the "original" Codex Spirensis was later lost, De rebus bellicis, and some of the other texts in the codex which did not exist elsewhere, including the Notitia dignitatum, survived through the copies made at that time. These copies appear to have included faithful renditions of the numerous colored illustrations.

Thompson cited above includes black and white reproductions of the images of imaginative machines in De rebus bellicis. The images, some of which are available on the web, are especially notable because they are copies of late Roman book illustrations, very few of which survived.

Notitia Dignitatum, One of the Few Surviving Sources for the Administrative Structure of the Late Roman Empire
The Codex Spirensis, of which Only a Single Leaf of the Original Survives

The Ottoman Turks Capture Constantinople, Resulting in the Transfer of Invaluable Manuscripts to Venice and the West
Composition of the Four Gospels
Pamphilus Establishes a Library and Scriptorium, and is Executed During the Diocletianic Persecution of Christians
Constantine Lascaris, "Erotemata", the First Book Printed Entirely in Greek Type
Constantin von Tischendorf Discovers and Acquires the Codex Sinaiticus: Controversial and Disputed
The Codex Sinaiticus
The Emperor Constantine Signs the Edict of Milan Proclaiming "Religious Toleration"
The Emperor Constantine Converts to Christianity Beginning with the Battle of the Milvian Bridge
Constantine Makes the City of BYZANTIUM his Capital and Names it Constantinople
Constantine's Religious Toleration Does Not Apply to Jews

Notitia Dignitatum, One of the Few Surviving Sources for the Administrative Structure of the Late Roman Empire
The Codex Spirensis, of which Only a Single Leaf of the Original Survives