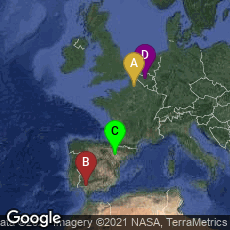 Excepting the Bible, Probably the Most Widely Circulated Educational Work During the Middle Ages was Isidore's Etymologiae

Considered among the earliest and finest of the "French" manuscripts of Etymologiae. MS II. 4856, and 8th century codexi, is preserved in the Bibliothèque royale de Belgique.

Perhaps in 633, or at his death in 636, Archbishop of Seville Isidore of Seville, frequently called "the last scholar of the ancient world," turned over his encyclopedic compilation of secular and ecclesiastical learning called Etymologiae, or Origines, to his friend, Bishop Braulio of Zaragoza (Braulius), for editing and distribution. Braulio was responsible for dividing the work into twenty books. Like Cassiodorus, who wrote his  Institutes of Divine Learning in Italy in the previous century, Isidore intended his Etymologiae to disseminate knowledge of books that had become scarce and difficult to find and read as a result of the decline of the Roman Empire and its educational system.

The dissemination of the work was swift and unusually extensive. Excepting the Bible, the Etymologiae was the most widely copied and circulated educational text during the Middle Ages. Over 1000 medieval manuscripts of the Etymologiae survive, but probably because of the length of the work (about 250,000 words in English translation), it was also widely excerpted, and only 60 manuscripts include the complete text. In Latin Palaeography: Antiquity and the Middle Ages (1990; p. 193) Bischoff speculated that the Moorish occupation of Spain in 711, which caused the migration of Spanish Christians into France, Sardinia and Italy, may have stimulated dissemination of this and other Spanish texts.

The manuscripts of Etymologiae are generally categorized as "Spanish", "French," and "Italian" with the greatest number surviving in French. Among the earliest and finest of the "French" manuscripts is the eighth century manuscript copied at Corbie, or in its vicinity, from a Spanish exemplar: MS II. 4856 preserved in the Bibliothèque royale de Belgique. Lowe, Codices Latini Antiquiores X, no. 1554.

"The Etymologies offered a long-influential model of information management based on summarizing books, notably those difficult of access, and following a topical order that was not always predictable but could be navigated through a table of contents listing book and chapter headings" (Blair, Too Much to Know: Managing Scholarly Information before the Modern Age [2010] 34).

"At the deepest level Isidore's encyclopedia is rooted in the dream that language can capture the universe and that if we but parse it correctly, it can lead us to the proper understanding of God's creation. His word derivations are not based on principles of historical linguistics but follow their own logic, serving as the basis for assertions and linkages of all sorts, often multiple and unresolved, 'Human being' (homo) is so called from 'soil' (humus), the material origin of the body (7.6.4); Mercurius is related to speech because speech is a 'go-between' (medius currens), but the god's name is also linked to 'commerce' (merx) 8.11.45-46); and poetry (carmen) derives either from the metrical and thus choppy way (carptim) it is recited from poets' madness (carere mente) (I.39.4)

"The Etymologiae displays all the late antique techniques of abbreviation, abridgment, selection, (re) ordering, and harmonizing, and Isidore is the master of bricolage.... Ludwig Traube described the work as 'a mosaic'... His reductions and compilations did indeed transmit ancient learning, but Isidore, who often relied on scholia and earlier compilations, is often simplistic scientifically and philosophically, especially compared to 4th and 5th-century figures such as Ambrose and Augustine. The Etymologiae frequently preserved for later generations some of the least helpful theories (from a scientific point of view) that were rooted in philosophy, not observation—for example the notion of the fixed 'sphere' of stars that derives from Plato's Timaeus. It also passed along, willy-nilly and however much its author as a Christian bishop may have regretted it, a universe filled with mythological references. If Isidore, like Augustine (from whom he adopts much), wished to banish the pagan gods, he nonetheless keeps them alive in his writings via euhemerist and other rationalizing explanations of pagan names and stories, just as he cites as authorities the very Latin poets whose works he asserts are 'fables' and 'fictions' (Etymologiae I.40.1)" (Ralph Hexter, "Isidore of Seville," Grafton, Most, Settis (eds) The Classical Tradition [2010] 490).

Etymologiae was first published in print by Gunther Zainer of Augsburg on November 19, 1472.

In 2006 the Vatican declared Isidore of Seville the patron saint of the Internet.

From the Monastery on the Small Island of Iona, St Columba Converts Pagan Scotland and Much of Northern England
The Contributions of the Emperor Charlemagne and the Educator Alcuin to the Carolingian Renaissance
Relative Costs in Corbie of the Components of a Medieval Manuscript
Bernard de Montfaucon Issues the First Continent-Wide Union Catalogue of Manuscripts
About 7000 Manuscripts and Fragments Survive from the Carolingian Renaissance
"To Fronto Belongs the Unique Distinction of Surviving Solely as the Lower Script in No Fewer than Three Palimpsests" (Reynolds)
"Very Little That Was Recopied in the Crucial Ninth Century Was Subsequently Lost"
Bathild and Clotaire III Found Corbie Abbey, Renowned for its Library
"The most ingenious and expressive work of narrative art known from all of Late Antiquity"