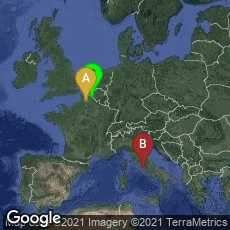 Vat. Lat. 3868, an illuminated manuscript of the comedies of Terence preserved in the Vatican Library, containing illustrations of 141 scenes from the plays, is one of four surviving copies of late antique illuminated manuscripts most probably copied at the court of Louis the Pious in the second decade of the ninth century.

In a monograph entitled The Lost Late Antique Illustrated Terence (2006) David Wright attempted to reconstruct the lost exemplar from which the manuscript was copied. He characterized this lost exemplar as "the most ingenious and expressive work of narrative art known from all of Late Antiquity."

"He argues that it was made at Rome around 400 AD, under the supervision of Calliopius, who is named on fol. 1v and 92r Feliciter Calliopio Bono Scholastico. Scholasticus could mean a teacher or a grammarian, it is not a term obviously linked to book production, though Wright regards the colophon as ‘a trade mark and an advertisement for the workshop’ and suggests that Calliopius was ‘the master of the scriptorium’. The final colophon Hrodgarius scripsit, in excellent large capitalis script, identifies the scribe, who has not been found elsewhere. The best of the three artists wrote the inscription Adelricus me fecit on the right-hand side of the cornice of the aedicule on fol. 3r. . . .

"The copying of classical texts on parchment in codices, rather than on papyrus rolls, was a fourth-century innovation, and the lost exemplar was ‘something of a pioneer in the design of a sumptuously presented codex’. Illustrations to Terence did not exist, and Wright suggests that staged performances of Terence's plays had ended some three centuries earlier. So the exemplar of the Vatican manuscript contained illustrations of the scenes which depended on the artist reading the text. Most impressive are the full-page frontispiece with two actors flanking an author portrait, and the full-page depictions of aedicules with masks for all of the characters in the individual plays (of which two were lost).

"The copy is the work of three artists, of whom Adelricus was the best, though he had the smallest share of the work. The parchment is calf rather than sheep, and it has numerous minor defects, including holes in pages 9, 11, 19, 36, 43 (in body of figure), 53, 56 and 64. The figures are generally shown standing on a coloured baseline: on fol. 36v there are two figures in a garden, and in several scenes the figures stand in front of doorways, sometimes fitted with a central curtain or a decorated grille. Properties include a square-shaped casket (fol. 29r p. 51), a ring, birds and fishes as food, and money bags. Cratinus the lawyer holds wax tablets on fol. 82r and v. Many of the figures wear scarves and gesture with them. The figures are named in capitalis script, but in several cases the names are given to the wrong figure in a scene. Wright argues that there were names in the exemplar, which must imply that the scribe who copied them was singularly inept. The curious position of the prologue to the Phormio on fol. 77v, where the figure is to the left of a block of text, is not commented on.

"The illustrations do not seem to have influenced manuscript illumination except for additional illustrated copies of Terence. The ninth-century Reims manuscript, Paris, BNF, Lat. 7899, has a full set of illustrations, while a Corbie copy has much cruder illustrations on the first eleven folios and spaces for further illustrations. Wright thinks both were copied from the lost exemplar. Adelricus was an accomplished artist, and presumably had a career. It may not be possible to explain why the court of Louis the Pious made such careful copies of late antique manuscripts, but it is important to recall that it did, and to envisage the possible resonances of such a response to non-Christian models. According to Thegan's biography Louis never raised his voice in laughter, and when the people laughed at scurri et mimi cum coraulis he did not smile. Paschasius Radbertus, in his memorial for Abbot Wala of Corbie, included a substantial passage from Terence, showing that he had studied the plays, as had Hincmar. The glosses in Vat. Lat. 3868 reveal that it was rapidly treated as a text to be studied, rather than simply a luxury book. Unfortunately Wright is silent on any evidence to be derived from these glosses, which are thought to be a Carolingian composition but which incorporate earlier material.

"The scribe Hrodgarius wrote a very distinctive capital ‘H’ with an elongated ascender on the right slanting upwards from the crossbar to trail over the following letter. Such a form of ‘H’ is also found in fifth-century manuscripts and was presumably copied from the exemplar. He used an ‘or’ ligature with a prominent ‘r’. His form of ‘a’ lacks any upper shaft, and the upper bow of ‘g’ is generally open. The ligatures ‘ri’ and ‘ro’ occur infrequently. So far his script has proved impossible to localize. It is worth noting that fifteen verses from the prologue to the Heautontimoroumenos were copied onto the first leaf of Paris, BNF, Lat. 2109 in a script which E.K. Rand described as ‘decent rustic capitals’. The manuscript, a copy of Eugippius' Excerpta, was copied at St Amand at the same time as Vat. Lat. 3868. So there probably was a capitalis exemplar at St Amand which may have been the manuscript Wright is trying to reconstruct.

"Wright reconstructs an exemplar of some 220 folios, each with an illustration of a single scene, with the text copied in rustic capitals in 22 lines per page. In his stylistic parallels for the date of this exemplar he strangely makes no mention of the mosaics of Santa Maria Maggiore in Rome, which Byvanck discussed in detail, though they show many similar poses and gestures. The scenes on the Susanna crystal have groupings of figures not unlike the Terence illustrations. We are getting a clearer sense of how Carolingian artists imitated Roman models of sacred art. That they were equally moved by the superb quality of secular illustration should remind us that beauty, old and new, is always powerful enough to be loved and to transform. That the exemplar of the Vatican Terence was so challenging to a group of artists in the 820s may be the most important of the features that Wright has so carefully recovered for us" (review by David Ganz http://onlinelibrary.wiley.com/doi/10.1111/j.1468-, 0254.2009.00292_20.x/full, accessed 09-15-2010).

From the Monastery on the Small Island of Iona, St Columba Converts Pagan Scotland and Much of Northern England
The Contributions of the Emperor Charlemagne and the Educator Alcuin to the Carolingian Renaissance
Relative Costs in Corbie of the Components of a Medieval Manuscript
Bernard de Montfaucon Issues the First Continent-Wide Union Catalogue of Manuscripts
About 7000 Manuscripts and Fragments Survive from the Carolingian Renaissance
"To Fronto Belongs the Unique Distinction of Surviving Solely as the Lower Script in No Fewer than Three Palimpsests" (Reynolds)
"Very Little That Was Recopied in the Crucial Ninth Century Was Subsequently Lost"
Bathild and Clotaire III Found Corbie Abbey, Renowned for its Library
Excepting the Bible, Probably the Most Widely Circulated Educational Work During the Middle Ages was Isidore's Etymologiae