This ad in Paris chez Soi varies slightly from the version of the ad in Le Canada.  The text may be translated as "Printed by mechanical systems of Ad. Delcambre et Cie, Rue Breda 15, Paris. New system patented in France and foreign countries. The Pianotyp is on the right, the justifier in the middle, and the distributing system, probably following the Gaubert patent, is on the left.

The caption in the ad at the end of Le Canada... underlines Delcambre's marketing of his equipment as a cost-saving device since the machines could be run by women, who at that time were paid half the wages of men. Image Source: gallica.bnf.fr
The reference to the Young & Delcambre Machine-Compositeur is in the lower part of the border. This model of the Pianotype, preserved at the Paris Musée des arts et metiers, measures 48 x 38 x 38 cm. It is made of wood, copper, ivory ferrous alloy, and brass. The same model may also have been exhibited in France in 1844 and 1849. As much as setting type was a challenge, distributing the type after printing may have been an equal challenge. The images shows Young's attempt at a type distribution machine from Lacroix (1868). Jeremy Norman Collection of Images -&nbspCreative Commons
That Young's Piantyp and type distribution machine were exhibited in 1862 is more a reflection of their continued novelty than any hint of general acceptance by the printing trades. 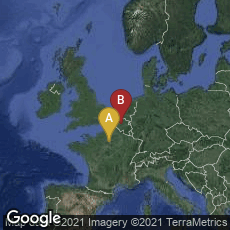 Jeremy Norman Collection of Images -&nbspCreative Commons
The upper printed wrapper for Paris chez soi is very unusual as it was discarded from most copies when they were bound.

We have little evidence that James Hadden Young and Adrien Delcambre succeeded in promoting their "Pianotyp" composing machine in England beyond the first edition of the book by Binns and the two periodicals typeset by their machine during 1842-1843. However, their system received significant publicity in England and elsewhere in Europe beginning in 1840-1844. Among the articles about the machine intended for popular audiences were those in l'Illustration (1843) and Illustrirte Zeitung (1844). Besides this, in Paris, Delcambre, in association with Young, went into business as a typesetter, printer and publisher in the Montmartre district. Records show that this partnership operated from 1844 to 1849.

Prior to that the Pianotyp was used to set the type for a 23-page pamphlet, Un alchimiste au dix-neuvième siécle by Alexandre Dumas published in Paris by Imprimerie Administrative de Paul Dupont & Cie in 1843. This we know because of a notice in the lower part of the typographic border on the upper printed wrapper, which in this instance also served as a title page, reading "Composé à la Machine-Compositeur typographique de MM. Young et Delcambre." This short pamphlet published by the industrial printer Paul Dupont has the earmarks of an experimental or promotional publication. Whether Dupont continued with the typesetting machines after this experiment remains uncertain.

Through the 1850s Adrien Delcambre continued his printing and typsetting activity, in 1853 setting up a major industrial printing shop. It is reasonable to assume that Delcambre would have had at least some of the books he printed typeset by machinery, providing both a way to exploit and promote his new technology.

According to Cheron's Catalogue général de la librairie francaise au 19e siècle, vol. 3, col. 669 Delcambre also issued several pamphlets promoting the composing machine. Later, Isidore Delcambre continued the business, and is known to have exhibited his version of the machine at the Universal Exhibition in London, 1862. In 1856 and 1866 Isidore also received two patents for composing machines, indicating that improved versions of the machines remained in production at least through those dates. A single scale model of the Pianotype has survived in the Musée des arts et métiers, Paris. As late as 1868 Eugène Lacroix reported in his discussion of "l'imprimerie et les livres" in Etudes sur l'exposition de 1867, ou les Archives de l'industrie au XIXème siècle. Nouvelle technologie des arts et métiers, des manufactures that the machine was being exhibited at the Paris Exposition of 1867, pp. 150-156. At this date Lacroix paid special attention to Young's machine for type distribution, which he illustrated on p. 156. According to Gautier and Gesprez's Les curiosités de l'Exposition de 1878, p. 174, versions of the machine continued to be exhibited at that date. The images that Lacroix reproduced were taken from Cassell's Illustrated Family Paper Exhibitor July, 1862.

In 1855 Paul Boizard issued from Paris, Paris chez soi: Revue historique, monumentale et pittoresque de Paris ancien et moderne. This was an ordinary small quarto publication printed on ordinary paper in relatively small type in two columns on 384 pages plus index. Its one unusual aspect was the full-page advertisement on the leaf following the title page for the Young & Delcambre typesetting machine that had been used to set the type on this publication. Because of this ad we know that this book was typeset by machine. It is one of a handful of other identifiable French publications that were also typeset by the "Pianotyp" composing machine in Paris around this time. Another book that was both typeset by Delcambre and also printed by "Typographie mécanique d'Adrien Delcambre et Cie" was Le Canada reconquis par la France by J. G. Barth published by Ledoyen in Paris, also in 1855. The advertisement that Delcambre added to this book on its final page was slightly different from that in Paris chez soi, with a caption emphasizing the employment of women to operate the Pianotyp. Incidentally, Delcambre clearly identified his firm as printer on the back of the half-title and on the rear printed wrapper of this work. In his ad for his typesetting and distributing machines he referred to his machine as "Pianotype" so clearly that and the briefer version of the name must have been interchangeable.

Even though the mechanical process of setting type and redistributing it after typesetting was relatively awkward, and the great majority of all typesetting done during the 19th century was done by hand, from 1840 onward a significant group of inventors in England, Europe, and the United States continued to attempt to solve the very complex mechanical problems involved in mechanical composition and distribution. Probably the best summary of these early attempts is in Lucien Alphone Legros and John Cameron Grant's Typographical Printing-Surfaces: The Technology and Mechanism of their Production (London & New York: Longmans, Green, 1916). The authors devoted many chapters (pp. 279-452) to the very wide variety of machines for type composition, distribution, and type casting that had been developed, various estoteric models of which may have remained in operation in 1916. Inevitably most of the different machines built must have been used for typesetting of certain publications but retrospective identification of those specific works typeset by specific machines tends to be difficult. By the time of publication of Legros and Grant's book manual typesetting had for the most part been replaced by mechanical systems, with the Linotype and Monotype systems generally standardized among printers, though other systems remained in operation to a lesser extent. The authors concluded their book (p. 572) with what they called a conservative estimate of the number of mechanical typesetting systems in operation in England, Europe, and the United States in 1916: 44,000 machines. At this time by far the most popular machines were Linotype: circa 33,000, Monotype: circa 5,000. They also list "Monoline: circa 2000" and "Typograph: circa 4,000".

The best paper on the early history of typesetting machines with special detail on Young and the Delcambres is François Jarrige, "Le mauvais genre de la machine: Les ouvriers du livre et la composition mécanique (France, Angleterre, 1840-1880)," Revue d'histoire moderne & contemporaine I (2007) No. 54-1. It is also worth mentioning that many discoveries remain to be made in the identification of publications typeset by these early machines.