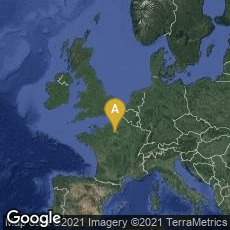 Compagnie des Machines Bull launched the first stored-program electronic computer produced for commercial sale in France-- the Gamma ET, also known as the Gamma 3B2T. This model was also called "Ordonnateur" or ordinateur, the French word for computer.  It competed against the IBM 650.

The Gamma ET had a magnetic drum with 16K (16384) words capacity The main memory was 128 words, 64 of them that contained instructions. An entry model of Gamma ET included 64 words of main memory.

Gamma ET took an important position on the French scientific market in the second part of the 1950s. The Centre National de Calcul Electronique, had been established by Bull from 1951 and was used by French and European labs that did not have their own computers. Performance of the CNCE was boosted substantially by the acquisition of the Gamma ET.