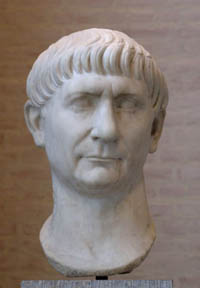 After the Libraries of Alexandria and Pergamum (Pergamon), the Bibliotheca Ulpia, or the Ulpian Library, was the most famous library of antiquity and, of all the Roman libraries, the only one to survive at least until the fall of Rome in the mid-fifth century. It was founded by the Emperor Trajan in his Forum in 114 CE.

"This collection may have been based on the 30,000-volume private library of Epaphrodites [Epaphroditus] of Cheronea, and like other Roman libraries, it was divided into Greek and Latin sections. Early in the 4th century, this library was moved to the Baths of Diocletian. . . .This move was apparently only temporary, possibly while the Forum was being repaired, since the library is reported to have been returned at a later date. Trajan’s library was still in existence in 455 A.D. when a bust of Didonius Apollinarius was placed there by the Emperor Avitus” (Harris, History of Libraries in the Western World 4th ed. [1999] 58.)

♦ In December 2013 a computer reconstruction of the interior of the Ulpian Library was available at this link.

The Library of Aristotle: Basis for the Royal Library of Alexandria?
The Library of Pergamum (Pergamon) is Founded
Galen's Grief at the Loss of His Personal Library: Rediscovery of a Long Lost Treatise by Galen on Books and Libraries