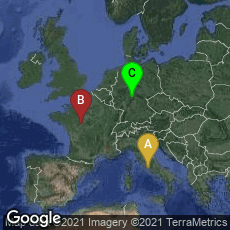 The Apicius manuscript copied at the monastery of Fulda in Germany, which was acquired in 1929 by the New York Academy of Medicine. 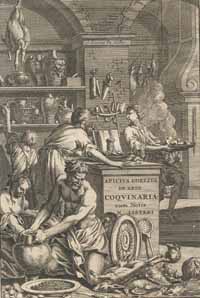 The earliest surviving codex of the earliest cookbook, entitled De re coquinaria, and attributed to Apicius, a gastronome of the first century, was copied at the monastery of Fulda, Germany, by seven different monks. It was written in language that is closer to Vulgar than to Classical Latin, partly in Carolingian minuscule and partly in Anglo-Saxon script of the Fulda type, and because so many hands were involved, it is thought that this manuscript may have been used for training monks in the Fulda scriptorium. The manuscript

"was known to Poggio in 1417, but remained at Fulda until brought to Rome by Enoch of Ascoli in 1455. It subequently had a long series of Italian owners, beginning with Basilios Bessarion, and had sojourned in France and England before it emigrated to the United States in 1929" (L.D. Reynolds, Texts and Transmission [1983] 13-14).

The manuscript of 57 leaves is preserved in the New York Academy of Medicine Library, where it was recently restored and rebound.

"The book had been rebound in the 18th century by a French book dealer in mottled calf with gilt edges. The book dealer had removed the 9th century binding to separate the Apicius from a text by Hippocrates—the two had been bound together. (The Hippocrates now resides in a collection in Geneva, Switzerland, and is bound in the same 18th century mottled calf as formerly on the Academy’s Apicius manuscript)."

Marcus Gavius Apicius, was a gastronome in the age of Tiberius,

"but the cookbook that bears his name, reveals strands and layers which been selected and combined from various sources, medical and agricultural as well as purely gastonomic, and successively added, as time went on, to what remains of the original Apician recipes. The Excerpta of the Ostrogoth Vinidarius, made a little later, [and preserved in a single eighth century manuscript,] is a highly abbreviated version of a similar compilation. These works were subsequently transmitted, except for the inevitable excerpting, essentially in the forms in which they existed in antiquity" (Reynolds & Wilson 235).

Apicius's work was first printed in Milano by Guillaume le Signerre on January 20, 1498.  ISTC No.: ia00921000. In February 2014 a digital facsimile of the first printed edition was available from the Bayerische Staatsbibliothek at this link.

About 7000 Manuscripts and Fragments Survive from the Carolingian Renaissance
The Vivian Bible, Lavishly Illuminated for Charles the Bald
The Magnificent Upper Cover of the Lindau Gospels
Foundation of the Archives nationales de France
The Utrecht Psalter, "The Most Frequently Studied of All Illuminated Books"
"Mass Production" of Bibles at Tours: A "New" Development in Medieval Book Production