In this enlargement of p. 124 the initials G.A.P. are visible at the foot of the woodcut. This is the signature of Geronima [Cagnaccia] Parasole, one of the first female artists to sign their name in a book illustration. 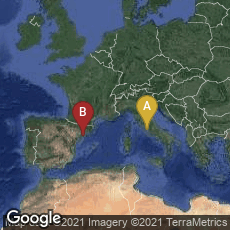 Agustín's Study of Ancient Coinage: Probably the Earliest Book with Illustrations by a Woman In 1592 Dialoghi . .. intorno alle medaglie inscrittioni et altre antichita. . . by archaeologist, humanist, jurist and Archbishop of Aragon Antonio Agustín y Albanell (Agostín, Augustino, Augustinus) was posthumously issued in Rome, from the press of Guglielmo Faciotto. This volume on ancient coins included over 1200 woodcut depictions of coins, and six half page woodcuts of arches and buildings. Agustín's work had previously been published as Dialogos de medallas in his native Spanish in Tarragona, 1587, just after his death. The book was written in the form of eleven dialogues between an experienced antiquarian and a pair of beginners eager to learn about coins, inscriptions, and other antiquities. Agustín began his book with an introduction on identifying medals and coins, and a discussion of their usefulness to historians. He also explained the function of ancient coins, confirming that they were meant to be circulated as currency. The next four dialogues he dedicated to what is found on the reverse of Roman coins by subject: deities, cities, rivers, buildings, animals, and other symbols. Agustín then moved on to discuss the medals of Africa, France, and Spain, with special focus on Andalucia, Lusitania (Portugal), and Barcelona. In his final chapter he discussed how to identify fakes. In the original Spanish edition there were 51 engraved plates, illustrating only dialogues 1 and 2, possibly because Agustín was unable to arrange for more illustrations before his death.

Agustín had gained fame as a jurist and humanist with the publication in 1543 to great aclaim of his edition and commentary on the sixth century Florentine codex of the Digesta or Pandectae portion of Justinian's Corpus Juris Civilis. Appointed auditor of the Rota, the papal court, he became the center of an informal academy in Rome devoted to studying antiquities, along with Fulvio Orsini and Pirro Ligorio.

Augustín wrote his Dialogos for a general audience, and because it was widely appreciated, two competing Italian translations were issued in Rome in 1592: that of Faciotto with over 1200 woodcuts inserted throughout the text, and Discorsi sopra le medaglie illustrated with 72 engraved plates issued by Ascanio and Girolamo Donangeli. Probably because the woodcuts in Faciotto's edition were easier to print and reprint than copperplates which could only withstand a limited number of impressions, the Faciotto edition became more widely distributed, and was reprinted and revised up to 1736.

The Faciotti edition of 1592 is also notable because of some of its woodcuts were cut by Geronima Parasole:

"Some of the large woodcuts bear the monograms P.M.F. (e.g. on the title border) or G.A.P. (e.g. on p. 124) attributed to Geronima [Cagnaccia] Parasole (fl. end of the 16th century), a Roman artist, cousin of Isabetta Parasole, who was with Vinciolo and Cesare Vecellio, the most important lace designer of the late 16th century. Apart from Geronima's contribution to the present work, only a few woodcuts by her after designs of Antonio Tempesta are known (cf. G.K. Nagler, Die Monogrammisten, München, 1919, II p. 968, no. 2715; IV, p. 926, no. 3141). It seems very likely that this is the earliest known book in which illustrations by a woman are found. In the sixteenth century only thirty-five women are known to have been artists, and according to our researches Geronima and Isabetta Parasole were the only women who contributed to book illustration in that period (cf. W. Slatkin Woman Artists in History, Englewood Cliffs, NJ, 1958, p. 38)" (My Gracious Silence 130).

The Vergilius Vaticanus, One of the Oldest Surviving Illustrated Codices
Codex Bembinus, the Oldest Surviving Manuscript of the Comedies of Terence
Vergilius Augusteus, the Earliest Codex Written Entirely in Roman Square Capitals, and the Earliest Codex with a Large Ornamented Initial Letter at the Beginning of Each Page
The Forma Urbis Romae, Monumental Stone Map of Ancient Rome
Fulvio Orsini Issues the First Critically Assembled Collection and Edition of Ancient Portraiture