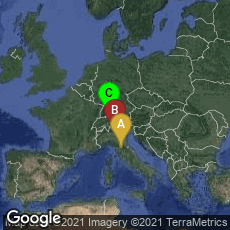 Architectural frontispiece of the illuminated manuscript of De rerum natura produced in 1483 by Girolamo di Matteo de Tauris for Pope Sixtus IV. The Pope's arms are at the foot of the page.

"Lucretius was rediscovered by Poggio in 1417, during the Council of Constance. He found the manuscript, not in one of the local monasteries, but in a 'locus satis loginquus,' [a sufficiently remote place] which he does not bother to name. Poggio sent his only copy to Niccoló Niccoli for him to transcribe and, despite increasingly querulous requests for its return, Niccoli was still sitting on the manuscript in 1429. Niccoli's autograph survives and is now Florence, Laur. 35.30 (L). There are more than fifty extant descendants of Poggio's manuscript and the effort devoted to sorting them out, at times half-baked, has been slow to produce results. It seems to be established at long last that ∏ is derived from O, so that the Itali have no textual value except as a repository of conjectures. But Lucretius passed through such distinguished hands in the course of the Renaissance that the later history of his text can throw a great deal of light on the capacity and cross-currents of humanist scholarship, as a recent and significant contribution to the subject amply demonstrates. . . . "(L. D. Reynolds, "Lucretius," Texts and Transmission, Reynolds [ed] [1983] 221).

Though Niccoli's transcription of Poggio's text survived, the copy which Poggio sent to Niccoli did not.

Because of its scientific rather than religious aspects De rerum natura was not one of the mostly widely printed classical texts during early years of printing. However, there were four fifteenth century printed editions, the first of which was issued in Brescia by teacher, minor author, priest and printer Thomas Ferrandus about 1473-74. Of this edition only 4 copies are recorded. ISTC No. il00332900.

One of the most famous illuminated manuscripts of De rerum natura was produced in 1483 for Pope Sixtus IV, the renowned patron of the arts best known for the Sistine Chapel. The Pope's coat of arms appears at the foot of fol.1 recto  (Vat. lat. 1569).

The story of Poggio's rediscovery of the text of Lucretius, and the consequences of this rediscovery, became the subject of Stephen Greenblat's remarkable best-selling book entitled The Swerve. How the World Became Modern (2011).

At Alexandria Ptolemy Writes the Almagest, the Cosmographia, and the Tetrabiblos
"De re militari", the First Printed Book on Technology with the First Woodcuts on a Scientific or Technological Subject
Paganino & Alessandro Paganini Issue the First Printed Edition of the Qur'an in Arabic, of Which One Copy Survived
Nicolaus Copernicus Begins the Copernican Revolution
The Earliest Surviving Manuscript Written in Ireland, the Oldest Surviving Irish Manuscript of the Psalter, and the Earliest Recorded Historical Case-Law on the Right to Copy
The Codex Argenteus, The Primary Surviving Example of the Gothic Language
Theophilus's Medieval Handbook of Applied Arts Including Book Production
The Epic of Gilgamesh, Probable Source of Aspects of Biblical and Homeric Literature
Michael Servetus: Medical Discovery, Heresy, and Martyrdom
Venetus A, the Most Famous, and Most Significant Manuscript of the Iliad