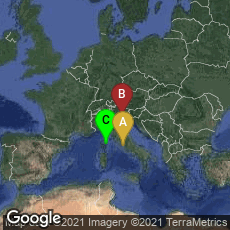 The First Printed Editions of Herodotus First page of the 1474 edition of Herodotus from the Bayerische Staatsbibliothek.

Before December 1474 French printer Jacques le Rouge, whose name was Latinized to Jacobus Rubeus, issued the first printed edition of the Historiae of Herodotus from Venice. The text Rubeus used was the Latin translation by humanist Lorenzo Valla, who had also produced the first Latin translation of Thucydides. For Rubeus's edition Valla's translation was edited by Benedictus Brognolus (Benedetto Brognolo). In April 2014 a digital facsimile of this edition was available from the Bayerische Staatsbibliothek at this link.

Herodotus must have been a study seller in the fifteenth century. Less than a year later, on April 20, 1475, printer Arnold Pannartz in Rome issued the second printed edition of Herodotus's work, also in Valla's Latin translation, but this time with the text revised by humanist Johannes Andreas de Bussis (Giovanni Andrea Bussi), bishop of Aléria. Bussi was  the chief editor for the printing house of Conrad Sweynheym and Arnold Pannartz after it moved from Subiaco to Rome. The partnership had dissolved in 1473, but in the following year Pannartz resumed publication on his own account, eventually producing another dozen books.

Three other editions of Herodotus in Latin appeared in the 15th century. In 1494 Johannes and Gregorius de Gregoriis, de Forlivio, of Venice re-issued Valla's Latin translation, this time edited by humanist pedagogue, grammarian, and rhetorician Antonio Mancinelli of Velletri. In April 2014 a digital facsimile of that edition was available from the Bayerisches Staatsbibliothek at this link. In 1495 Simon Bevilaqua of Venice reissued Mancinelli's edition together with Isocrates, Oratio de laudibus Helenae. In 1498 another version of that combination of texts was issued by Christophorus de Pensis, De Mandello, also in Venice.