Second page of Sweynheim & Pannartz's list of their books published through March 20, 1472. They claimed to have printed 1100 copies of Nicolas de Lyra—a large printing for a mid-15th century edition. From the copy in the Bayerische Staatsbibliothek. 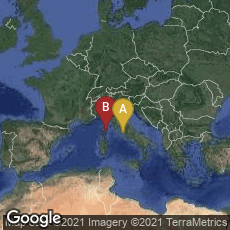 First page of the Sweynheim & Pannartz's list of their publications together with the number of copies they had printed spelled out and restated in Roman numerals, as it appears in the first page of n the fifth volume of their edition of  Nicholas de Lyra (Nicolas de Lyre, Nicolaus Lyranus) Postilla litteralis super totam Bibliam (March 1472). From the copy in the Bayerische Staatsbibliothek.

In 1472 humanist Giovanni Andrea Bussi (Joannes Andreae de Bussis), bishop of Aléria, on Corsica, and the chief editor for the printing house of Conrad Sweynheym and Arnold Pannartz after it moved from Subiaco to Rome, requested financial assistance for Sweynheym and Pannartz from Pope Sixtus IV. Bussi wrote that the printers, who typically published 275 copies in a single edition, had 10,000 unsold volumes and would have to go out of business without financial aid.

According to their own published claims in the fifth volume of their edition of  Nicholas de Lyra (Nicolas de Lyre, Nicolaus Lyranus) Postilla litteralis super totam Bibliam (March 1472), Sweynheym and Pannartz had printed a total of about 12,475 books since 1465. If so, they were far more successful in printing books than in selling them.

In July 2014 a digital facsimile of volume five of Nicholas de Lyra's Postilla issued by Sweynheym and Pannartz was available from the Bavarian Staatsbibliothek at this link.