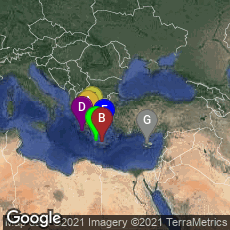 Linear B and its Decipherment: Records of Mycenaean Civilization

Clay tablet (PY Ub 1318) inscribed with Linear B script, from the Mycenaean palace of Pylos. This piece contains information on the distribution of bovine, pig and deer hides to shoe and saddle-makers. This and other tablets were fortuitously preserved when they were baked in the fire that destroyed the palace around 1200 BCE. National Archaeological Museum of Athens.

"Before the advent of the Greek alphabet, the written records of Mainland Greece, Crete, and Cyprus were recorded using a family of five related scripts. The earliest of these was Cretan Hieroglyphic, devised by the Minoans on Crete at the end of the 3rd millennium BCE; their later script, Linear A, is based on Cretan Hieroglyphic. Linear A in turn served as the model for two more scripts near the end of the Bronze Age: Cypro-Minoan, the script of the pre-Greek inhabitants of Cyprus; and Linear B, the script of the Mycenaeans, used for writing Mycenaean Greek. Finally, in the early Iron Age, the Greek-speaking peoples of Cyprus used Cypro-Minoan as the model for a new script, the Cypriot Syllabary, and employed it to write in their own dialect of Greek" (Brent Davis, Introduction to the Aegean Pre-Alphabetic Scripts [2010]).

About 1450 BCE, during or shortly after the period in which Cypro-Minoan was created on Cyprus, the Mycenaeans devised their own script based on the still undeciphered script known today as Linear A, and began using it to create administrative records. This syllabic script, different from Linear A, and first found in the discovery of Knossos on Crete in 1878, was called Linear B by archaeologist Arthur Evans.

"Mycenaean artifacts have been found well outside the limits of the Mycenaean world: namely Mycenaean swords are known from as far away as Georgia in the Caucasus, an amber object inscribed with Linear B symbols has been found in Bavaria, Germany and Mycenaean bronze double axes and other objects dating from the 13th century BC have been found in Ireland and in Wessex and Cornwall in England" (Wikipedia article on Mycenaean Greece, accessed 10-13-2014).

During 1952 and 1953 English architect and classical scholar Michael Ventris deciphered Linear B without the aid of a bilingual document—the use of which was so instrumental in the decipherment of other ancient languages such as Phoenician, Egyptian hieroglyphs and cuneiform script. Ventris's remarkable achievement proved that Linear B is an early form of Greek (Mycenaean Greek) used from about 1450 to 1200 BCE.

During the Bronze Age Collapse, from circa 1200-1150 BCE Linear B, found mainly in the palace archives  at Knossos, Cydonia, Pylos, Thebes and Mycenae, disappeared with the fall of Mycenaean  civilization. The succeeding period, known as the Greek Dark Ages, left no evidence of the use of writing. With the collapse of the palatial centers at Knossos and elsewhere—one possible but no longer widely accepted explanation for which was the eruption of the volcano on the island of Thera (Santorini)—no more monumental stone buildings were built and the practice of wall painting may have ceased. Writing in Linear B also ceased, vital trade links were lost, and towns and villages were abandoned. The population of Greece was reduced, and the world of organized state armies, kings, officials, and redistributive economies disappeared. Most of the information concerning the Greek Dark Ages comes from burial sites and artifacts contained within the graves. To what extent the earliest Greek literary sources, the Iliad and Odyssey— products of the oral tradition— and Hesiod's Works and Days written after writing was reintroduced to Greece, describe life in the Greek Dark Ages or earlier remains an issue debated by scholars.

In February 2014 a very useful anonymous illustrated historical summary of "The Decipherment Process" was available from the classics department at the University of Cambridge at this link. The latest bibliographical reference in this PDF was dated 2013.

In 2013 attention was drawn to the work of the American classicist Alice Kober, who worked for years on the decipherment of Linear B, but died of lung cancer in 1950 at the early age of 43. It was suggested that Ventris may have been assisted in his discovery by work done by Kober.

The Earliest European Alphabet and the Oldest Writing Tablets
Standardization of the Homeric Texts Possibly Begins
Pamphilus Establishes a Library and Scriptorium, and is Executed During the Diocletianic Persecution of Christians
The Gezer Calendar, One of the Earliest Surviving Examples of Written Hebrew
The Word Bibliography is Derived from a Greek Word for Papyrus
The "Fatal Letter" in the Iliad: Introduction of Written Language to the Greeks
The Izbet Sartah Abecedary, One of the Best Examples of the Proto-Canaanite Alphabet
The Oldest Known Evidence of the Phoenician Alphabet
The First Olympic Games Take Place

Knowledge as Power: King Ashurbanipal Forms the Earliest Systematically Collected Library as Distinct from an Archive
Ashurbanipal's Prayer to Nabu, the God of Writing
Thousands of Cuneiform Tablets Document Babylonian Mathematics
The Most Famous Document of Babylonian Mathematics
The Code of Hammurabi, Discovered in Khuzestan, Iran by Gustav Jéquier
The Largest Surviving Medical Treatise from Ancient Mesopotamia
The Earliest Printing was Stamped into Soft Clay in Mesopotamia
Sennacherib's Annals, Inscribed on Three Surviving Six-Sided Prisms
The Behistun Inscription, the "Rosetta Stone" of Cuneiform Script