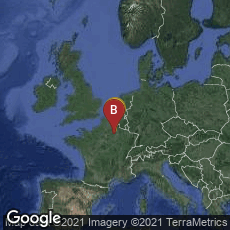 The Utrecht Psalter, "The Most Frequently Studied of All Illuminated Books"

The Utrecht Psalter, one of the most influential of ninth century illuminated manuscripts, with among the most unusual histories of ownership, contains 166 pen illustrations, one accompanying each of 150 psalms and 16 canticles in the manuscript. It was written in imitation rustic capitals. According to the most recent study (1996) the manuscript was written at the monastery of Hautvillers, near Reims, France as it is related in style to the Ebbo Gospels. It may have been sponsored by Ebbo, Archbishop of Reims, in which case it would be dated between 816 and 835. Others have argued for a date circa 850, believing that the psalm illustrations draw from the travels of Saxon theologian Gottschalk of Orbais, and the illustration with the Athanasian Creed and other details pertain more to Archbishop Hincmar, Ebbo's successor.

The Utrecht Psalter has been characterized as "the most frequently studied of all illuminated books" (van der Horst 24), the authors of which also state that "it occupies a prominent position in every handbook or outline of the history of Western art."

Named for its ownership in Utecht, where it is preserved in the Universiteitsbibliotheek (MS Bibl. Rhenotraiectinae I Nr. 32), the psalter was, after its rediscovery in the library at Utrecht in 1858, thought for a period of time to be a sixth century work because of the archaic style of its rustic capitals.

"A period spent in the late 9th century in the area of Metz, perhaps at the court of Charles the Bald, has been suggested on the basis of apparent influences from the manuscript in the art of the area. The manuscript had reached Canterbury Cathedral by c. 1000, at which time a copy began to be made of it; this, the Harley Psalter, is in the British Library as MS Harley 603. The Psalter was copied in full three times in the Middle Ages, the second copy being the Eadwine Psalter (Cambridge, Trinity College Library, MS R.17.1) of 1155–60, with additions 1160–70, and the texts extended to five versions of each psalm. The last copy is a fine version in full colour with gold backgrounds that is known as the "Anglo-Catalan Psalter" or MS Lat. 8846 in the BnF, of 1180-90 (Morgan, 47-9). This was half-illustrated by an English artist in about 1180-1200, and completed by a Catalan artist in 1340-50, naturally using a different Gothic style. The images are necessarily somewhat simplified, and the number of figures reduced.

"Earlier there were derivative works in other media; similar groups of figures appear in a Carolingian engraved crystal in the British Museum (the Lothair Crystal, stylistically very different) and metalwork, and some late Carolingian ivories repeat figure compositions found in the Utrecht psalter (Calkins, 211).

"The original manuscript spent at least two centuries at Canterbury from the year 1000, and after the English Dissolution of the Monasteries (Canterbury was a monastic cathedral) came into the possession of Robert Bruce Cotton, the famous English antiquary, at which point it was rebound, with his arms on the cover. Cotton lent the manuscript to the great collector [Thomas Howard], the [21st] Earl of Arundel, who took it into exile with him during the English Civil War; it was taken to the Netherlands in around 1642 and sold on Howard's death by his widow and son. It reached Utrecht University in 1716, at which point it was incorporated into the University Library. It was rediscovered in the library in 1858."

"The Utrecht Psalter is generally considered to be important to the development of Anglo-Saxon art in the late tenth century, as the artistic style of its artwork seems to have been drawn on and adapted by Anglo-Saxon artists of this time. Although it is hardly likely that this single manuscript was solely responsible for beginning an entire new phase, the style which developed from it is sometimes known as the 'Utrecht' style of outline drawing, and survived almost unchanged into the 1020s (Wormald).

"The Psalter is the earliest and most fully illustrated of a 'narrative' group of Carolingian Psalters and other manuscripts; the much greater freedom of their illustrations may represent a different, probably monastic, audience for them from the more hieratic productions for the court and the altar. Images are unframed, often varied and original in iconography, showing a 'liveliness of mind and independence of convention' not found in the more formal books. Other members of the group are the Golden Psalter of St. Gall and the Drogo Sacramentary, which made the important innovation of placing most illustrations in inhabited initials. The Byzantine Chludov Psalter represents a comparable tradition in the East (Hinks, 115-119), and the Reims style was also influenced by artists fleeing Byzantine iconoclasm (Berenson, 163). Meyer Schapiro is among those who have proposed that the Psalter copied illustrations from a Late Antique manuscript; apart from an original perhaps of the 4th or 5th centuries, details of the iconography led him to believe in an intermediary Latin model' of after about 700 (Shapiro, 77, 110 and passim). That the miniatures are in large part based on an earlier manuscript, initially disputed by some (Tselos, 334 etc.), seems to have gained general acceptance, though the precise nature and dates of earlier postulated versions vary.

"The style of the outline drawings is dramatic, marked by activity, leaping creatures and fluttering folds of drapery set in faintly sketched landscape backgrounds stretching the full span of a page. Several different episodes may be shown in an illustration, some interpreting the text very literally, indeed over-literally in typical medieval fashion, others building on an association with the text to create elaborate images, including New Testament scenes or motifs from Christian iconography (Pächt, 168-170). Despite the individuality of the style, the hands of eight different artists have been detected" (Wikipedia article on Utrecht Psalter, accessed 08-01-2011).

A beautiful and authoritative study of the manuscript, placing it within context of related works of the time, is van der Horst, Noel, and Wüstefeld (eds.) The Utrecht Psalter in Medieval Art. Picturing the Psalms of David (1996).  The first facsimile of the Utrecht psalter was published as Latin Psalter in the University Library of Utrecht in 1875. A second printed facsimile was published in Graz, Austria, in 1984.

In February 2014 a digital facsimile was available from the University Library of Utrecht at this link.

About 7000 Manuscripts and Fragments Survive from the Carolingian Renaissance
The Vivian Bible, Lavishly Illuminated for Charles the Bald
Apicius's De Re Coquinaria, the Earliest Surviving Cookbook
The Magnificent Upper Cover of the Lindau Gospels
Foundation of the Archives nationales de France
"Mass Production" of Bibles at Tours: A "New" Development in Medieval Book Production

Sir Hans Sloan's Library and Cabinet of Curiosities Found the British Museum
Beowulf: Known from a Unique Medieval Manuscript
Four Copies of the Original Magna Carta Survived
Sir Robert Bruce Cotton Collects One of the Most Important Libraries Ever Assembled by an Englishman
The Cotton Genesis, Fragments of a Fifth or Sixth Century Codex
The Oldest English Translation of Any Portion of the Bible
Creation of the Lindisfarne Gospels

The Earliest Surviving Example of a Greek Chronological Table