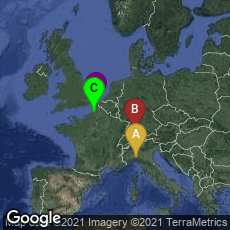 "In practice the text of Lucretius rests upon two Leiden manuscripts traditonally known from the format as the Oblongus (O) and Quadratus (Q). The older and better is O (Voss. Lat. F. 30). It was written not long after 800 in the Palace School of Charlemagne. A contemporary corrector, using a distinctive insular hand, emended the text and in places filled up lacunae left by the orignal scribe. This hand has been recognized as that of Dungal, who became, after the death of Alcuin, the foremost Carolinian authority on astronomy and computus. It is agreeable to wonder, in the duller moments of life, if this formidable Irishman would have much rejoiced in his posthumous title of the 'corrector Saxonicus' (O). The history of O during the later Middle Ages is obscure, but by 1479 it had reached St. Martins at Mainz. Q (Voss. Lat. Q. 94) was written in the ninth century in north-east France; it appears to have spent most of the Middle Ages in Saint-Bertin....

"It would seem that Lucretius emerged towards the end of the eighth century, that the archetype of our manuscripts found its home in the Carolingian court, and that the text was disseminated from there, radiating westwards into the Low Countries and northern France and southwards along the Rhine. Excerpts show that the text was disseminated and used, and it seems to have been well established in the area of Lake Constance. Lines from the De rerum natura occur in two metrical florilegia, that of Mico of Saint-Riquier, put together at Reichenau about 825, and the Florilegium Sangallense (St. Gall 870, c.900). Lucretius is also quoted in a letter written from St. Gall by Ermenrich of Ellwangen c. 850, and there was a copy of his poem in the ninth century at Murbach. Then, despite this promising start, Lucretius went underground for the rest of the Middle Ages, an eclipse which may be partly explained by the passionately anti-religious nature of his message. All we have until the fifteenth century are a few fleeting glimpses. The abbey of Lobbes acquired a Lucretius, probably in the early twelfth century, and he is listed in the twelfth-century catalogue of Corbie.  The presence of Q at Saint-Bertin may well explain the echoes of Lucretius in the Encomium Emmae and the Lucretian gloss in Sigebert of Gembloux (c. 1030-1112) fits with the availability of his poem in the closely connected abbey of Lobbes. The degree to which the De rerum natura was known in Italy before the fifteenth century is more problematical. There was a manuscript at Bobbio in the ninth century, faint echoes have been detected in medieval Italian works, and one line, probably quoted at second hand and important from northern Europe, occurs in a florilegium of south Italian origin preserved in Venice, Marc. Lat. Z 497 (1811)" (L. D. Reynolds, "Lucretius," Texts and Transmission, Reynolds [ed] [1983] 219-21).

Regarding the earliest surviving text of Lucretius, the codex oblongus, Leiden University Library commented as follows on their website:

"This manuscript distinguishes itself by the spacious layout of the page. In spite of its large dimensions, the page counts only twenty lines. The ample spacing does full justice to the excellent Carolingian minuscule, the new script which was developed towards the end of the 8th century. As happened so often, this original manuscript was corrected afterwards. Sometimes this was done by comparing the copied text carefully with the exemplar, the book which served as a model for the copy. At other times the corrector would use his own judgment. Of course it was desirable to save the book's appearance as much as possible. In the case of parchment this is not difficult, for the writing is easily scratched out with a knife. This is what the corrector of this Lucretius manuscript did. One alteration on the presented page, folio 22r., immediately catches the eye, because the corrector replaced one single line by two new ones, marring the layout of the page in the process. The corrector's adjustments are easily recognizable, because he used another script, the so-called Insular script, which originated in England and Ireland" (http://www.mmdc.nl/static/site/highlights/352/Scribe_and_corrector.html, accessed 05-28-2012).

At York Alcuin Collects One of the Finest Libraries North of the Alps: About 100 Books
The Contributions of the Emperor Charlemagne and the Educator Alcuin to the Carolingian Renaissance
Vikings Sack the Monastery and Library of Lindisfarne in the First Viking Raid on Britain
Vikings Destroy the Library of York Cathedral
About 7000 Manuscripts and Fragments Survive from the Carolingian Renaissance
The Archetype of Vitruvius's "De architectura"
Patrick McGurk Analyzes the "Architecture" of 138 Surviving Early Latin Gospel Books
"Mass Production" of Bibles at Tours: A "New" Development in Medieval Book Production
The "Moutier-Grandval Bible," a Masterpiece from the Scriptorium at Tours

Computus, for Calculating the Date of Easter, is the Root of the Modern Word "Computer"
Finger Reckoning and Computus in the Eighth Century
A Medieval Hand Mnemonic for Reckoning Time

From the Monastery on the Small Island of Iona, St Columba Converts Pagan Scotland and Much of Northern England
The Contributions of the Emperor Charlemagne and the Educator Alcuin to the Carolingian Renaissance
Relative Costs in Corbie of the Components of a Medieval Manuscript
Bernard de Montfaucon Issues the First Continent-Wide Union Catalogue of Manuscripts
About 7000 Manuscripts and Fragments Survive from the Carolingian Renaissance
"To Fronto Belongs the Unique Distinction of Surviving Solely as the Lower Script in No Fewer than Three Palimpsests" (Reynolds)
"Very Little That Was Recopied in the Crucial Ninth Century Was Subsequently Lost"
Bathild and Clotaire III Found Corbie Abbey, Renowned for its Library
"The most ingenious and expressive work of narrative art known from all of Late Antiquity"
Excepting the Bible, Probably the Most Widely Circulated Educational Work During the Middle Ages was Isidore's Etymologiae

From the Monastery on the Small Island of Iona, St Columba Converts Pagan Scotland and Much of Northern England
Saint Columbanus Founds the Monastery and Library at Bobbio
The Codex Argenteus, The Primary Surviving Example of the Gothic Language
Federico Borromeo Founds the Biblioteca Ambrosiana, the Second "Public" Library in Europe
Bernard de Montfaucon Issues the First Continent-Wide Union Catalogue of Manuscripts
The Dark Ages for Study of the Classics on the European Continent as Documented in Palimpsests
"To Fronto Belongs the Unique Distinction of Surviving Solely as the Lower Script in No Fewer than Three Palimpsests" (Reynolds)
Umberto Eco Publishes "The Name of the Rose"
Gerbert Requests a Latin Transation of an Arabic Text
Angelo Mai Discovers the Earliest and Largest Part of the Surviving Text of Cicero's "De re publica" Preserved in a Palimpsest