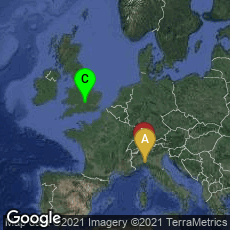 On 1609 Cardinal Federico Borromeo founded the Biblioteca Ambrosiana in Milan. Depending on how "public library" is defined, the Ambrosiana was possibly the the second public library in Europe, after the Bodleian at Oxford. However, the Ambrosiana was preceded in Italy by the library at the Domincan convent of San Marco (1444) and the Biblioteca Medicea Laurenziana (1571), both of which were characterized as "public" libraries when they were founded. Thus, there may be some uncertainly as to which library was actually the first "public" library in Europe.

To build up the Ambrosiana's collections Cardinal Borromeo's agents scoured Western Europe, and even Greece and Syria for books and manuscripts. In 1606 they acquired the complete manuscripts of the Benedictine monastery of Bobbio, founded in 614, and the library of the Paduan Vincenzo Pinelli, whose more than 800 manuscripts filled 70 cases when they were sent to Milan, and included the famous extremely early illuminated miniatures of the Iliad, the Ilias Ambrosiana.

"During Cardinal Borromeo's sojourns in Rome, 1585–95 and 1597–1601, he envisioned developing this library in Milan as one open to scholars and that would serve as a bulwark of Catholic scholarship against the treatises issuing from Protestant presses. To house the cardinal's 15,000 manuscripts and twice that many printed books, Construction began in 1603 under designs and direction of Lelio Buzzi and Francesco Maria Richini. When its first reading room, the Sala Fredericiana, opened to the public, December 8, 1609, it was, after the Bodleian Library in Oxford, the second public library in Europe. One innovation was that its books were housed in cases ranged along the walls, rather than chained to reading tables, a practice seen still today in the Laurentian Library of Florence. A printing press was attached to the library, and a school for instruction in the classical languages.

"Cardinal Borromeo gave his collection of paintings and drawings to the library too. Shortly after the cardinal's death his library acquired twelve manuscripts of Leonardo da Vinci, including the Codex Atlanticus. . . ." (Wikipedia article on the Biblioteca Ambroisiana).

Thomas Bodley Founds The Bodleian, the First "Public" Library in England, & the First British National Library
Philology Probably Begins at the Royal Library of Alexandria
The Codex Amiatinus: the Earliest Surviving Complete Bible in the Latin Vulgate, Containing One of the Earliest Surviving Images of Bookbindings and a Bookcase
The d'Orville Euclid, the Oldest Dated Manuscript of a Classical Greek Author
The Letters of Abelard and Heloise: Among the Best Known Records of Early Forbidden Romantic Love
Four Copies of the Original Magna Carta Survived
"Registrum Anglie de libris doctorum et auctorum ueterum," a Medieval Union Catalogue of Manuscripts in England, Scotland and Wales
Philobiblon, Perhaps the Earliest Treatise on Book Collecting and on Preserving Books & Creating a Library
Gabriel Naudé Issues One of the Earliest Works on Librarianship
The Cairo Genizah, the Largest and Most Diverse Collection of Medieval Manuscripts in the World

Foundation of the Library of the Dominican Convent of San Marco, the First "Public" Library in Renaissance Europe
Biblioteca Malatestiana, the First European Civic Library, the Only Completely Preserved 15th Century Library

Pandectarum codex Florentinus, an Almost Unique Witness to the Original Justinian Digest
The Largest Primary Source for Music of the Trecento
Celsus's De Medicina, the Oldest Western Medical Document after the Hippocratic Writings, and How it Survived the Middle Ages
Opening of the Biblioteca Medicea Laurenziana Designed by Michelangelo
The Text of Tacitus' Annals and Histories Survived in Only Two Manuscripts
Clairvaux Abbey, from which 1115 Medieval Manuscripts Survived

From the Monastery on the Small Island of Iona, St Columba Converts Pagan Scotland and Much of Northern England
Saint Columbanus Founds the Monastery and Library at Bobbio
The Codex Argenteus, The Primary Surviving Example of the Gothic Language
Bernard de Montfaucon Issues the First Continent-Wide Union Catalogue of Manuscripts
The Dark Ages for Study of the Classics on the European Continent as Documented in Palimpsests
"To Fronto Belongs the Unique Distinction of Surviving Solely as the Lower Script in No Fewer than Three Palimpsests" (Reynolds)
Umberto Eco Publishes "The Name of the Rose"
Gerbert Requests a Latin Transation of an Arabic Text
Angelo Mai Discovers the Earliest and Largest Part of the Surviving Text of Cicero's "De re publica" Preserved in a Palimpsest

The Vergilius Vaticanus, One of the Oldest Surviving Illustrated Codices
The Only Illustrated Homer from Antiquity